Ukraine Archbishop says "I invite everyone who hears me today to join in the daily common, all-church prayer for Ukraine..." 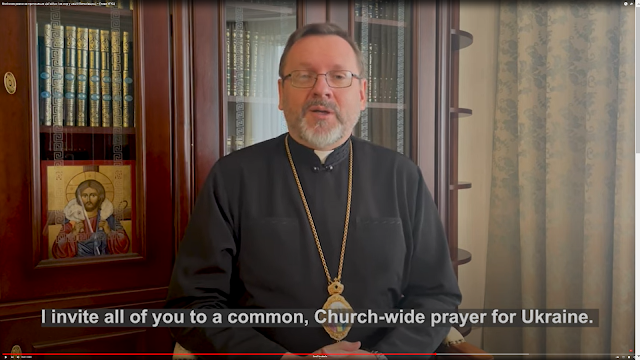 Christ is Risen!
Dear brothers and sisters in Christ!
Today is Friday, May 20, 2022, and Ukraine is experiencing the 86th day of Russia's terrible aggression against our people and our state.
There are fierce battles in eastern Ukraine. The enemy is attacking, trying to storm our cities, in particular in Luhansk region. Fierce fighting is going on in the east of Kharkiv region, in Donetsk region. The south of Ukraine is defending itself on the one hand, and on the other - is under heavy shelling from the occupiers, who are trying to stay on the shores of the Black and Azov Seas.
The enemy is again shelling our towns and villages on the Russian border of Chernihiv and Sumy regions, as well as in the Kharkiv region. One can only imagine the drama of those people who were forced to leave their homes, then returned, found their home alive, were already happy with the restoration of peaceful life - and here again from Russian territory shells hit these homes, bombs fall, people die.

Unfortunately, we have dead and wounded in those cities and villages of Ukraine.
But Ukraine stands. Ukraine is struggling. Ukraine defeats its enemy. Ukraine shows the world the heroism of ordinary people. We know that our people are going through tragic times… But it is the strength of spirit of the sons and daughters of our people and our army that turns these tragic times into heroic times. In fact, the war gives birth to new heroes of Ukraine, heroes of love for the Motherland, for God and for one's neighbor.
Today I would like to reflect on the work of charity for the soul of our neighbor, which crowns all the works of charity that we have considered so far - to pray for the living and the dead. This work of charity is in fact one of the most important, because without it all other works of man lose their Christian meaning.
In today's world, we may not fully feel the power and value of prayer… We better understand some of the immediate actions that are the subject of social interest, psychological attention to man. However, the soul and the body without the spirit of God weaken and cannot do anything good. Christ says, "Without Me you can do nothing." And John Chrysostom says that "there is no such poor man who could not do acts of charity."
Prayer is one of the main works of charity, which not only helps but also saves a person, gives meaning to his earthly life, opens the arms of Heavenly Father to him. The work of charity is the prayer of intercession. When we, as the Church, the Body of our Lord, intercede in prayer before Heavenly Father for our living or dead brothers and sisters in need, we pray with Jesus Christ, the Head of that Body. And He prays with us in the Holy Spirit, prays in us and for us to His Heavenly Father, as St. Paul says. Augustine.
I invite everyone who hears me today to join in the daily common, all-church prayer for Ukraine at 9:00 pm Kyiv time (8:00 pm Roman time). We pray together for the living and the dead in Ukraine. We pray together for an end to this war and for peace in our homeland.
Yesterday, as a community of Churches and Christians of Ukraine, as a nation, we experienced two very important international events. I would like to thank Archbishop Paul Gallagher, who is the Secretary for Relations of the Holy See with the States, in secular terms, the Minister of Foreign Affairs of the Apostolic Capital. His presence among us is a special manifestation of the Holy Father's attention to the needs of Ukraine, a moment of listening and prayer. We are grateful to the Holy See for everything that is being done today, in particular in the diplomatic field, to stop the unjust Russian aggressor.
We also experienced the visit of a delegation of the Polish episcopate led by its president, Archbishop Stanislaw Gondiecki. We thank the brothers and sisters from Catholic Poland who pray and help Ukraine. We saw those shots of Poles in the center of Warsaw, on the sidewalks, on their knees, with a rosary in their hands, standing in prayer. Sincere thanks to all those who today support Ukraine and show their solidarity with our people.
God bless Ukraine! God bless the Ukrainian army! God, accept into your arms the innocent victims of this war who have already departed from this earthly life! God bless all those who are victims of this war, and grant Ukraine victory!
The blessing of the Lord be upon you, with His grace and love of man, always, now, and forever and ever. Amen.
Christ is Risen! He is Risen Indeed!