Ukraine Archbishop says "...people lost everything in an instant...people in our communities walking with their families, almost barefoot, in the middle of the cold season, without even having anything to wear." 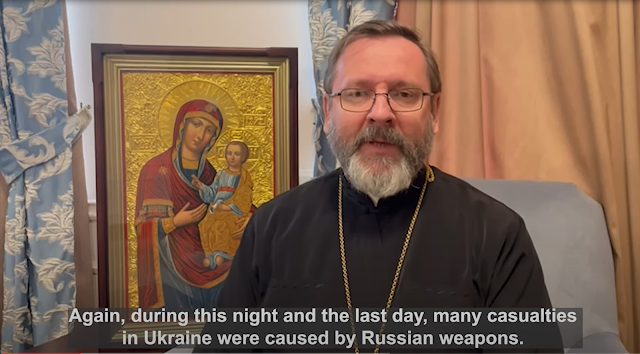 Daily Message of His Beatitude Sviatoslav, Father and Head of the Ukrainian Greek Catholic Church,  May 9, 2022: (After a school was hit killing 60 people)
We saw how during the bombing, shelling, people lost everything in an instant. They could leave their home with their bare hands, not being able to take with them anything they had acquired during their lives. Of Ukraine.
The Primate noted that the war is developing in all its horror, bringing new terrible sacrifices…
"But the Ukrainian people are standing! The Ukrainian people are fighting! The Ukrainian people are praying for their army, the state! And Ukrainians are trying to help, to serve each other, "the spiritual leader stressed.
On this day, the Head of the Church reflected on another work of charity for the body of our neighbor, which is very important for us to feel solidarity with those who are in the greatest trouble today - to put on the naked.
He noted that we saw people in our communities walking with their families, almost barefoot, in the middle of the cold season, without even having anything to wear.
"And that is why the task of every good person is to dress the naked, especially in the context of war," the spiritual leader said.
“To put clothes on the naked also means to feel its dignity, because clothing has always, in particular in the context of Scripture, been associated with a certain human dignity. Therefore, to serve one's neighbor's clothes means to honor him as a person, ”the Primate assures.
His Beatitude Sviatoslav thanked all those who sacrificed and donated to the latter in order to clothe him naked, in particular the one who lost all his property.
"When we do good deeds to our neighbor, we really feel that we already have a reward from the Lord God," the Head of the UGCC summed up.