Ukraine Archbishop says "...thousands of people come to our churches every day to ask for a piece of bread." 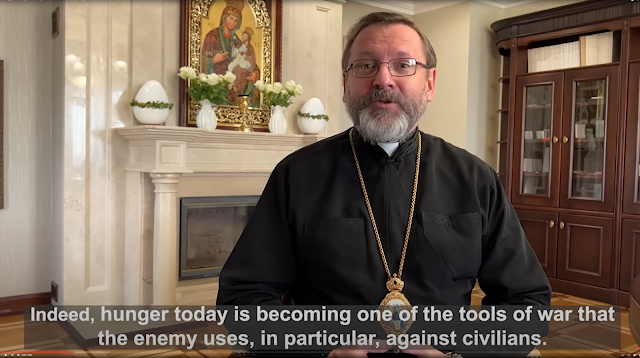 Daily Message of His Beatitude Sviatoslav, Father and Head of the Ukrainian Greek Catholic Church,  May 7, 2022:
Christ is Risen!
Dear brothers and sisters in Christ!
Today is Saturday, May 7, 2022, and Ukraine is already experiencing the 73rd day of the brutal war.
Again in the east and south of Ukraine there are very fierce, high-intensity fighting. Then there is the struggle for Mariupol, which stands heroically. Although a number of civilians have been evacuated, the Mariupol tragedy continues to unfold in the eyes of the world. And our special prayers for those who can really save lives in this besieged city, which is already in a state of hunger today. Indeed, hunger is becoming one of the tools of war that the enemy uses, in particular, against civilians.
However, despite this enormous pressure, the high-intensity war, the fatigue caused by such a long confrontation, the great wounds and casualties, especially among the civilian population, Ukraine is standing, Ukraine is fighting. And the determination to defend the Motherland is growing every day.
Today I would like to reflect on one question that has often been asked of spiritual people over the past two months.
Where to get the strength to survive? Where to get the strength to be able to defend the homeland for so long? The Christian tradition of the experience of spiritual struggle says that good deeds give us strength to resist evil, strange as it may seem.
Evil deeds, sins destroy a person, destroy him spiritually, morally, even psychologically. And a bad deed, a crime always leaves a bitter taste in a person's heart, and then his whole life rebukes his conscience. Instead, good deeds build a person, moreover, heal wounds, heal what may have been caused by some other human activity. Good human deeds are necessary for spiritual hygiene, so that we can spiritually, morally, psychologically withstand the fight against evil. Such actions always leave a feeling of satisfaction and joy, even when we do not feel such emotions at the time of their implementation. But the more time passes, the more we will be proud of our own good deeds, especially when they concern our neighbor. I would like to draw your attention to such acts of charity towards our neighbor, which can replenish our spiritual strength and make a great contribution to the victory of Ukraine.
The Catechism of our Church names seven works of charity for the soul and seven works of charity for the body of the neighbor. Let us begin today with the first act of charity for the body of our neighbor, which is well known to all of us - to feed the hungry.
We see that the war is causing hunger of varying intensity in different parts of Ukraine. Today, in our various parishes: in Kharkiv, Odessa, Kropyvnytskyi and other cities and villages of Ukraine, hundreds or even thousands of people come to our churches every day to ask for a piece of bread. Feeding the hungry is becoming one of the most important humanitarian challenges of this war, which could lead to a global food crisis, as has been said many times.
Man is able to feed various living beings. We feed our pets, the peasants feed the cattle. However, feeding a hungry person is something else entirely. Helping her find a piece of bread means helping her not only to live the day, but also to understand that God cares for her. For the word of God tells us: "Man does not live by bread alone, but by every word that proceeds from the mouth of God."
Therefore, in this time of war, we must take care to feed the hungry and, giving him this necessary food, respect his dignity, take an interest in him, give him his word. Because they say that when someone approaches a person with bread and does not carry the word of God, he comes with another human ideology.
Thank you to the whole world, which today is collecting humanitarian aid to Ukraine. On those packs that come to Ukraine from different parts of the world, you can read many words of support and joy that they can do a good deed to feed their neighbor. These are words that not only give earthly bread, but also convey the human, Christian values ​​that are so necessary for us all to survive today. Let's take care of those who are hungry today.
I express my sincere gratitude, in particular, to the Argentine Episcopal Conference, which concluded its first plenary just yesterday after a long pause caused by the coronavirus, and from which we have received enormous, tremendous support. Imagine: Catholic Argentina is collecting donations to save people in Ukraine to feed the hungry. Many thanks to the Christians of Argentina, the Ukrainian community, led by Bishop Daniel Kozlinsky for the example of good deeds.
God bless Ukraine! God bless the Ukrainian army! God bless the good people who know how to do good deeds and feel the joy of the good that comes from their heart to their neighbor!
The blessing of the Lord be upon you, with His grace and love of man, always, now, and forever and ever. Amen.
Christ is Risen! He is Risen Indeed!