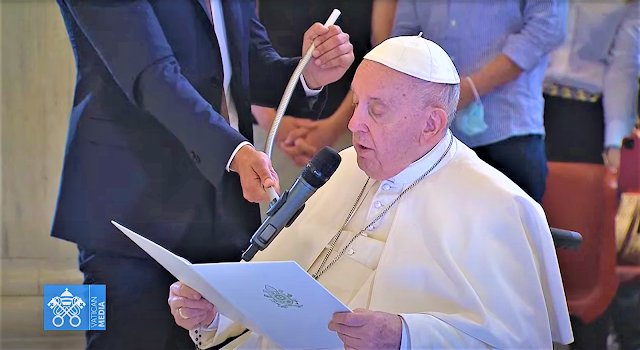 Pope Francis wished to offer a sign of hope to the world, suffering from the conflict in Ukraine, and deeply wounded by the violence of the many theaters of war still active. (SEE FULL Video below)

On Tuesday 31 May at 18:00, the Pope recited the Rosary prayer in front of the statue of Maria Regina Pacis in the Basilica of Santa Maria Maggiore in Rome. All the faithful in every part of the world were invited to support Pope Francis in praying to the Queen of Peace.

He recalled the requests made to Our Lady during the pandemic, "to support the sick and give strength to the medical staff", and "begging for mercy for the dying and wiping the tears of those who suffered in silence and solitude". The Pontiff also mentions the consecration to the Immaculate Heart of Mary, on March 25, of the nations at war and the plea for the "great gift of the conversion of hearts".

"We are sure that with the weapons of prayer, fasting, almsgiving, and with the gift of your grace, the hearts of men and the fate of the whole world can be changed. Today we raise our hearts to You, Queen of Peace: intercede for us with Your Son, reconcile hearts full of violence and vengeance, straighten thoughts blinded by the desire for easy enrichment, may your peace reign lastingly over the whole earth. ."

To precede the recitation of the Rosary, meditated with the sorrowful mysteries, the entrustment to God, through the Queen of Peace, of all humanity "severely tested by wars and armed conflicts". Mary, who visited Elizabeth, is evoked as a "missionary woman in bringing and sharing the joy of proclamation and a woman of charity in putting herself at the service of the most vulnerable".

The statue of Maria Regina Pacis (see picture below) is located in the left aisle of the Basilica of Santa Maria Maggiore. It was commissioned by Benedict XV, created by the sculptor Guido Galli, at the time deputy director of the Vatican Museums, to ask the Virgin for the end of the First World War in 1918. The Madonna is represented with her left arm raised as a sign to order the end of the war , while with the right he holds the Baby Jesus, ready to drop the olive branch symbolizing peace. Flowers are carved on the base, symbolizing the flourishing of life with the return of peace. It is traditional for the faithful to place small handwritten cards with prayer intentions at the feet of the Virgin. The Pope placed a wreath of flowers at the foot of the statue before addressing his prayer to Our Lady and leaving his particular intention. 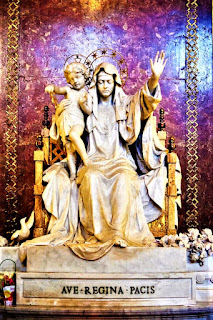 To support the Pope's prayer there was various categories of people representing the People of God. There will be boys and girls who have received First Communion and Confirmation in recent weeks, Scouts, families of the Ukrainian Community of Rome, representatives of the Ardente Youth Mariana (GAM), members of the Vatican Gendarmerie and the Pontifical Swiss Guard and the three parishes of Rome dedicated to the Virgin Mary Queen of Peace, together with the members of the Roman Curia.

As a sign of closeness to those most involved in the dynamics of these tragic events, they were invited to recite the tens of the Rosary: ​​a Ukrainian family, people linked to war victims and a group of military chaplains with their respective bodies.

Special Dedication for the mysteries of the Rosary

In the first mystery - Jesus in the garden of olives -, from the heart of Rome, prayer rises "for the victims of war, especially for the most defenseless people: children, the elderly, the sick", and again "for the torn families; for fathers and mothers who await the return of their children and for children who await the return of fathers and mothers from the battlefields, so that no one has to suffer unjustly ”. The second mystery - Jesus is scourged by soldiers - is dedicated to priests, to consecrated persons among the populations affected by the war, "so that they may always be instruments of mercy". Prayer "for medical personnel and volunteers who every day bring humanitarian aid to the most needy, so that they may be more and more convinced and numerous", and "for families and for all the people who have welcomed refugees into their homes with an open heart , so that they do not tire of expressing generosity and solidarity ”is entrusted to the third mystery, Jesus is crowned with thorns. The fourth mystery, Jesus carries the cross, wants to remember "the tortured and the dying, especially those who die in solitude, so that they remain anchored to the faith", and again "the raped and disappeared people" and their families and friends "so that they do not lose the hope". Finally, in the fifth mystery - Jesus is crucified and dies on the cross - the invitation is to pray that "through the redemptive death of Jesus Christ, who reconciled the world with the Father, wars may cease and a lasting peace may reign in all Nations ".