A Malawian Priest, Late Fr. Michael Mawelera Samson, a Missionary of Africa Priest, was reportedly found dead at Mbeya in Tanzania a day after he went missing from Mbeya Catholic Church Youth Centre. (FB pictured left)
"Fr. Samson was killed but we do not know by whom and under what circumstances" says to Fides His Exc. Mgr. Gervas John Mwasikwabhila Nyaisonga. His body was found on the banks of the Meta River on the morning of June 11.
"Parts of his body parts were found around 6:30 a.m. on June 11", Archbishop Gervas John Mwasikwabhila Nyaisonga said to Fides. "It's likely Father Samson was shot in the head, maybe he was knocked unconscious, and then the killer or killers set about dissecting his body. We do not think it was a witchcraft ritual, as all the limbs of the poor corpse were found. Normally, during witchcraft rituals, parts of the body disappear", the Archbishop said. Archbishop Nyaisonga adds that "Father Samson was killed in a different place from where his body was found, wrapped in a sheet so that it could be transported without leaving a trace of blood". 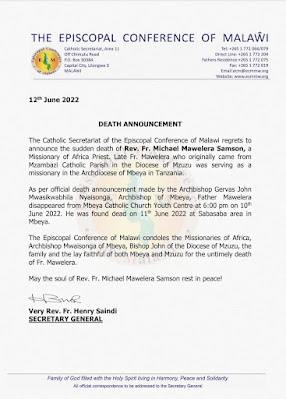 In a statement released signed by the Secretary General of the Episcopal Conference of Malawi (ECM), Rev. Fr. Henry Saindi, the priest was found dead at Sabasaba area in Mbeya on June 11, after he went missing from Mbeya Catholic Church Youth Centre on 10th June, 2022.
“The Episcopal Conference of Malawi regrets to announce the death of Priest Rev.Fr. Michael Mawelera Samson, who until his death, was serving as a missionary in the Archdiocese of Mbeya in Tanzania. “As per the official death announcement made by the Archbishop Gervas John Mwasikwabhila Nyaisonga, Archbishop of Mbeya, Father Mawelera disappeared from Mbeya Catholic Church Youth Centre at 6.00 pm on 10th June. He was found dead on 11th June 2022 at Sabasaba area in Mbeya,” reads part of the statement. The funeral of the murdered missionary will take place, June 16, in the presence of a delegation from the White Fathers and the Diocese of Mzuzu (Malawi), Father Samson's home.
With quotes from Fides and Episcopal Conference of Malawi