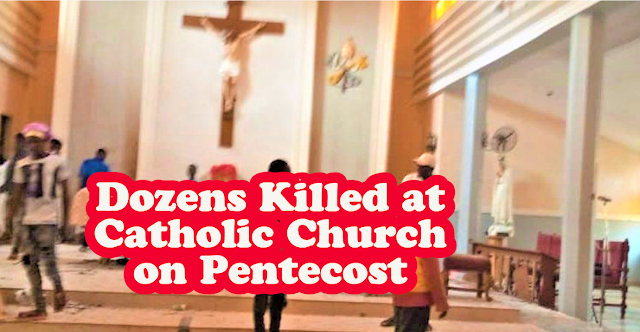 Unknown gunmen attacked St. Francis Catholic Church in Owo, Ondo State, Nigeria, Africa, killing over 50 members of the congregation including several children. The gunmen invaded the church during Pentecost Mass on Sunday morning, June 5 and opened fire on the congregants. The governor of the region called it a "vile and satanic" attack in a Tweet (see below).
According to reports, at least 50 corpses were removed from the church with many casualties (See Video below - Link to Pictures at Bottom). A source explained that the congregation were caught unaware, adding that the death toll might rise as some worshippers who were taken to the hospital have reportedly died.
Early reports said that there were kidnappings involved however, the diocese says the priest and several members of the congregation are safe and were not kidnapped.
Pope Francis “prays for the victims and for the country, painfully attacked at a time of celebration, and he entrusts everyone to the Lord, that God might send His Spirit to console them,” said Matteo Bruni, the Director of the Holy See Press Office, on Sunday.

I was deeply saddened to learn of the horrific attack at Saint Francis church in Owo in #Nigeria. #PrayTogether for all those affected by this act of unspeakable violence and for the conversion of those blinded by hatred and violence.

In a statement released on Sunday, June 5, His Exc. Mgr. Lucius Ugorji Elected Archbishop of Owerri and President of the Catholic Bishops' Conference of Nigeria (CBCN) said he "received the news of the bloody attack unleashed on innocent worshippers at … with great shock and sadness". "Nowhere seems to be safe again in our country; not even the sacred precincts of a Church. We condemn in the strongest terms the spilling of innocent blood in the House of God", says Bishop Ugorji. "The criminals responsible for such a sacrilegious and barbaric act demonstrate their lack of the sense of the sacred and the fear of the God", continues the President, who called Nigerian authorities for justice: "We call on the government to hunt them down and bring them to justice. If the government fails to act decisively on such a grave matter, it would be encouraging the descent of anarchy on our nation".
It was reported that the gunmen also used some explosives within the compound of the church but said most of the people were hit with gunshots. The perpetrators were said to have fled the scene immediately they carried out the killing, leaving many people dead.
The Islamic association Muslim Rights Concern, MURIC issued a statement saying; "the attack on the church of St. Francis is indubitable evidence of the existence of Boko Haram in the South West after their penetration into Niger and Kogi States", because "going by Boko Haram modus operandi, we warn that mosques and more churches may be the next targets because this was how they started in the North. We, therefore, ask for protection for all churches and mosques in the region", said a statement from the Islamic Association that works for the peaceful coexistence between the different confessions in Nigeria. MURIC "strongly condemn this act of unprovoked aggression. It is inhuman, heinous, horrific and horrendous" and call for immediate arrest and prosecution of the attackers". 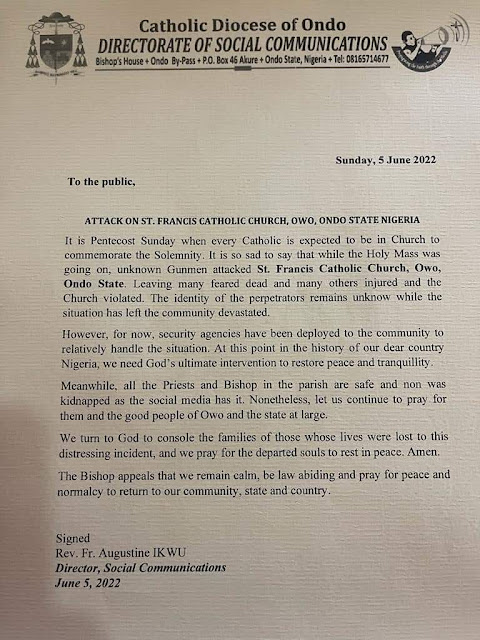 I am deeply saddened by the unprovoked attack and killing of innocent people of Owo, worshiping at the St. Francis Catholic Church, Today.

The vile & satanic attack is a calculated assault on the peace-loving people of Owo Kingdom who have enjoyed relative peace over the years. pic.twitter.com/30fMbfnOxc