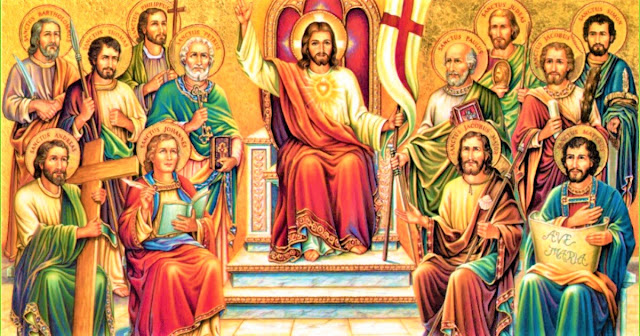 Memorial of Saint Barnabas, Apostle
Lectionary: 580/364
Reading I
Acts 11:21b-26; 13:1-3
In those days a great number who believed turned to the Lord.
The news about them reached the ears of the Church in Jerusalem,
and they sent Barnabas to go to Antioch.
When he arrived and saw the grace of God,
he rejoiced and encouraged them all
to remain faithful to the Lord in firmness of heart,
for he was a good man, filled with the Holy Spirit and faith.
And a large number of people was added to the Lord.
Then he went to Tarsus to look for Saul,
and when he had found him he brought him to Antioch.
For a whole year they met with the Church
and taught a large number of people,
and it was in Antioch that the disciples
were first called Christians.
Now there were in the Church at Antioch prophets and teachers:
Barnabas, Symeon who was called Niger,
Lucius of Cyrene,
Manaen who was a close friend of Herod the tetrarch, and Saul.
While they were worshiping the Lord and fasting, the Holy Spirit said,
“Set apart for me Barnabas and Saul
for the work to which I have called them.”
Then, completing their fasting and prayer,
they laid hands on them and sent them off.
Responsorial Psalm
98:1, 2-3ab, 3cd-4, 5-6
R.        (see 2b)  The Lord has revealed to the nations his saving power.
Sing to the LORD a new song,
for he has done wondrous deeds;
His right hand has won victory for him,
his holy arm.
R.        The Lord has revealed to the nations his saving power.
The LORD has made his salvation known:
in the sight of the nations he has revealed his justice.
He has remembered his kindness and his faithfulness
toward the house of Israel.
R.        The Lord has revealed to the nations his saving power.
All the ends of the earth have seen
the salvation by our God.
Sing joyfully to the LORD, all you lands;
break into song; sing praise.
R.        The Lord has revealed to the nations his saving power.
Sing praise to the LORD with the harp,
with the harp and melodious song.
With trumpets and the sound of the horn
sing joyfully before the King, the LORD.
R.        The Lord has revealed to the nations his saving power.
Alleluia
Ps 119:36a, 29b
R. Alleluia, alleluia.
Incline my heart, O God, to your decrees;
and favor me with your law.
R. Alleluia, alleluia.
Gospel
Mt 5:33-37
Jesus said to his disciples:
“You have heard that it was said to your ancestors,
Do not take a false oath,
but make good to the Lord all that you vow.
But I say to you, do not swear at all;
not by heaven, for it is God’s throne;
nor by the earth, for it is his footstool;
nor by Jerusalem, for it is the city of the great King.
Do not swear by your head,
for you cannot make a single hair white or black.
Let your ‘Yes’ mean ‘Yes,’ and your ‘No’ mean ‘No.’
Anything more is from the Evil One.”