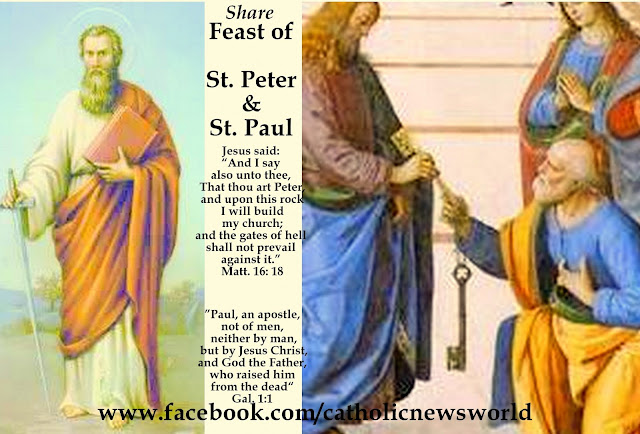 Solemnity of Saints Peter and Paul, Apostles - Mass during the Day

The Lord stood by me and gave me strength,
so that through me the proclamation might be completed
and all the Gentiles might hear it.
And I was rescued from the lion's mouth.
The Lord will rescue me from every evil threat
and will bring me safe to his heavenly Kingdom.
To him be glory forever and ever. Amen.

When Jesus went into the region of Caesarea Philippi
he asked his disciples,
"Who do people say that the Son of Man is?"
They replied, "Some say John the Baptist, others Elijah,
still others Jeremiah or one of the prophets."
He said to them, "But who do you say that I am?"
Simon Peter said in reply,
"You are the Christ, the Son of the living God."
Jesus said to him in reply, "Blessed are you, Simon son of Jonah.
For flesh and blood has not revealed this to you, but my heavenly Father.
And so I say to you, you are Peter,
and upon this rock I will build my Church,
and the gates of the netherworld shall not prevail against it.
I will give you the keys to the Kingdom of heaven.
Whatever you bind on earth shall be bound in heaven;
and whatever you loose on earth shall be loosed in heaven."
Prayer to make Spiritual Communion:
People who cannot communicate now make spiritual Communion. At your feet, O my Jesus I bow down and offer you the repentance of my contrite heart, which abysses itself into its nothingness and Your holy presence. I adore you in the Sacrament of Your love, the ineffable Eucharist. I wish to receive you in the poor home that my heart offers you. In anticipation of the happiness of sacramental communion, I want to possess you in spirit. Come to me, oh my Jesus, that I may come to you. May Your love inflame my whole being, for life and death. I believe in you, I hope in you, I love you. So be it. Amen