Pope Francis Reminds Priests to Act "in persona Christi" which "...must be lived fully in every moment of life, mindful of the words of the apostle Paul: "I no longer live, but Christ lives in me" 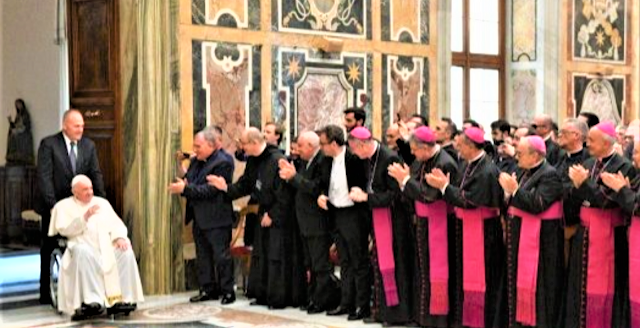 ADDRESS OF THE HOLY FATHER FRANCIS
TO THE BISHOPS AND PRIESTS OF THE CHURCHES OF SICILY
Clementina room
Thursday, June 9, 2022
____________________________________
Dear brothers!
I am happy to meet you. I remember with joy my trip to Piazza Armerina and Palermo: I have not forgotten it. I thank Monsignor Antonino Raspanti for the words he addressed to me on behalf of all of you. Bearing in mind the reality he presented, I would like to share some reflections. Another place that I have not forgotten about the trips is Agrigento, the first one I did, in front of the tragedy of Lampedusa.