Saint June 17 : St. Hervé of Brittany who was Born Blind but was Able to Cure Animals 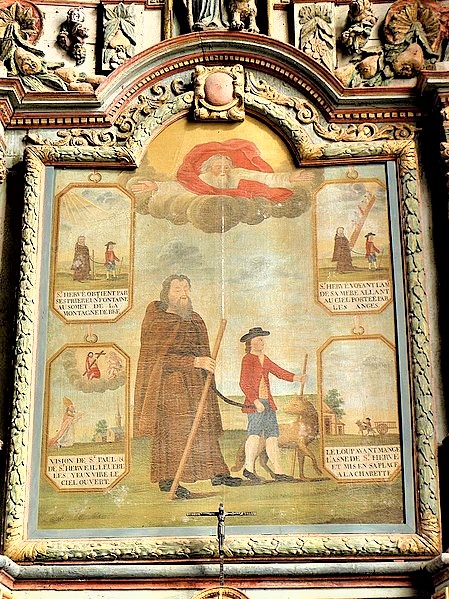 St Hervé (c 521–c 556) Hermit, Abbot, Musician and singer, miracle-worker, blind from birth – also known as Erveo, Harvey, Herveus, Hervues, Hervé, Houarniaule, Huva –
Born in: Guimiliau, Brittany, France or unknown location in Wales (sources vary) and died in c 556 to c 575 (sources vary) of natural causes.
Patron of: the blind, bards, musician, invoked against eye problems and disease, invoked to cure sick horses.
St. Hervé was the son of a traveling bard, a member of the court of one of the Frankish kings. Hervé was born blind, in the early sixth century. Even though he lacked sight, Hervé lived with great joy. He took after his father and began to sing as a bard and troubadour. He lived near the French city of Plouvien as a hermit with his disciple and companion, Guiharan.
Hervé became famous for his power to cure animals—wild and tame—and he tamed a wolf that was prowling the surrounding countryside. Hervé is often shown with his wolf, as legend has it the beast accompanied him everywhere.
Once, Hervé's wolf devoured the ox that Hervé kept as a draft animal. The pious Hervé began to eloquently preach a sermon, begging the wolf to aid him in caring for the crops. From that day forward, the wolf took over for the ox in pulling the plow for Hervé. Hervé's community of disciples grew, and a peaceful community of poet-hermits tended their land outside Plouvien until Hervé died in 556 AD.
St. Hervé, who, even though blind, saw God's love in all creatures—pray for us!
Source: http://faith.nd.edu/s/1210/faith/interior.aspx?sid=1210&gid=609&pgid=46238&cid=88651&ecid=88651&crid=0&calpgid=61&calcid=53508