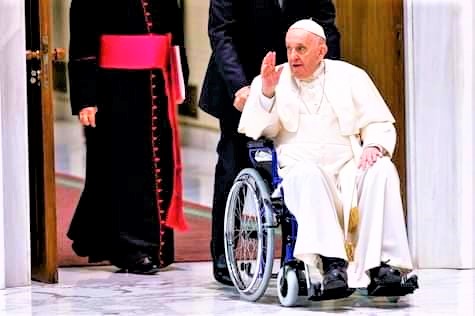 Pope Francis was forced to postpone his trip to Africa's Democratic Republic of Congo and South Sudan at his doctors’ request.
The Holy See Press Office announced that this Apostolic Journey, which was originally scheduled for early July, is postponed .
Pope Francis will travel on a later date, which is yet to be determined. Matteo Bruni, the director of the Holy See Press Office, made the announcement on June 10th. “At the request of his doctors, and in order not to jeopardize the results of the therapy that he is undergoing for his knee, the Holy Father has been forced to postpone, with regret, his Apostolic Journey to the Democratic Republic of Congo and to South Sudan, planned for 2 to 7 July, to a later date to be determined”. The Apostolic Journey to Africa was to include two stops in the DRC – in the capital, Kinshasa, and the city of Goma – and a visit to Juba, the capital of South Sudan.
Edited from Vatican News