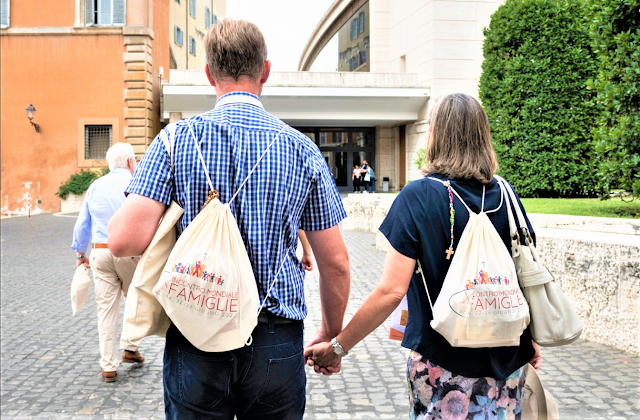 The World Meeting of Families is well underway in the Vatican. On Wednesday night, the 5-day event was introduced with the Festival of Families in the presence of the Holy Father. Then, on Thursday, speeches and panel discussions began with Gregory and Lisa Popcak, from the Peyton Institute for Domestic Church Life, who spoke of "The Domestic Church and Synodality: Towards a new ecclesiology through the liturgy of domestic church life".
WATCH FULL Day 2 in English Video 1 and Part 2 Video 2 below :
Lisa explained that they bring a little bit of God's love into everything we do. “It's about scheduling family time, even a little bit of family time first, every day so that we can do things like walk, talk, play and pray together.” "But it is also about making sure that we bring God into everything we do together in the little ways that we live our family life rather than isolating that time with God to specific family prayer time, which often, in the 'sloppiness' of family life we don't get to.. at least not very well", she said.
Eduardo De La Paz and Monica Gonzales, were speakers at the conference which opened the works of the Theological Pastoral Congress of the X World Meeting of Families. The two live in Toledo and teach marriage preparation courses for engaged couples.
This couple explained that the first years of marriage are a discovery. «Living together with each other, staying away from home, taking on new tasks and responsibilities, reaching agreements…. Little by little we realized that everyday life would have required efforts, sacrifices, sacrifices ». For this we need "our Mother Church, who illuminates and accompanies".
Not a wedding all "roses and flowers", the one presented by the two speakers. Just like the others who took turns on the stage of the Paul VI Hall, in the panels that followed: normal families, wounded, fragile, grappling with more or less big problems, from betrayal, to forgiveness, to abandonment.
The same happens at every latitude, in Africa and Europe, in Brazil and Canada. This was witnessed, among others, by Stephen and Sandra Conway, from South Africa, represented by “Retrouvaille”, a path for marriages in difficulty. «Retrouvaille - they explained - examines four phases of marriage: romance, disillusionment, misery (where our betrayal took place) and finally joy.
In the sentimental phase, the focus is on the other person and any defect is ignored or neglected. This sentimental phase does not last forever and couples may soon find themselves disillusioned by small annoyances that begin to creep in. Disillusionment can lead to unhappiness in which all the problems faced are attributed to the other person and life becomes a living hell ”. But then, through a journey in various stages, we reach joy. “In the joy phase we no longer focus on ourselves as individuals but now on ourselves as a couple united in the true meaning of love - the conclusion -. It is in this phase that we realize that love is not a feeling but in reality it is a decision ». another person and life becomes a living hell ». But then, through a journey in various stages, we reach joy.
The subsequent panels, in the second part of the afternoon of Thursday 23, were dedicated to the arrival of children and the acceptance of life. Jordi Cabanas and Gloria Arnau, Spaniards, spoke about adoption and foster care as a Christian choice. "We are a welcoming family because first we were welcomed ourselves, with only one merit - which is not small: to be intermediaries of the Love we have received".
Gigi De Palo, president of the Forum of family associations, and his wife Anna Chiara Gambini have also always welcomed life. At home, five children are waiting for them, the last one, four years old, with Down syndrome. «When our fifth child was born - they began - we had the arrogance of already knowing everything.
The experience, but also the pride of those who have already experienced 4 births, 4 weaning, 4 enrollments at school, 4 first rides, 4 first times at the beach ... as if things happened the same way twice. Our fifth child, Giorgio Maria, amazed us and changed our lives a second after his birth. Because he is not only a son with Down syndrome, but for us he was the earthquake of our useless certainties ». They do not want to be considered "good", however, they specified. "We are not a model family - they stressed -. We are simply one of the many families who said yes to life, not for an ideological question, not because they told us in the parish, but because it was beautiful. There is nothing to do: it is beauty that pushes us to do things. It is for beauty that we are Christians. It is for beauty that we are married. It is for beauty that we welcomed Giorgio Maria. Because life, every life is intrinsically worthy and is objectively more beautiful than death ».
Source: https://www.romefamily2022.com/it/news/23062022-2/ and Vatican News