What is the HOLY TRINITY - 10 Points you Need to Know about the Holy Trinity from the Catechism, Bible and History 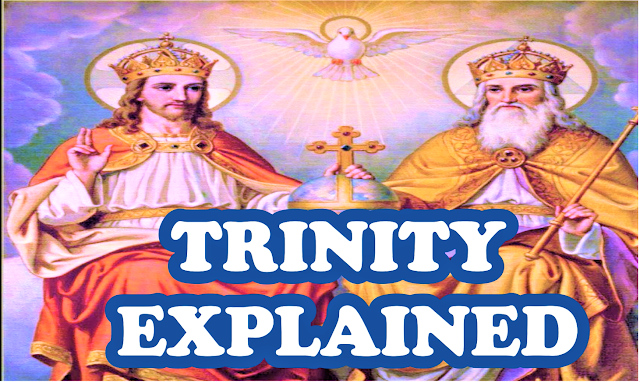 10 Points you Need to Know about the Holy Trinity from the Catechism, Bible and History

St. Patrick used the Shamrock or Clover to explain the Trinity as 3 in 1.

1. What is the Trinity
The Trinity refers to the Father, Son and Holy Spirit the 3 Persons in 1 God. This definition of God involves three consubstantial persons or hypostases. CCC 232 Christians are baptized "in the name of the Father and of the Son and of the Holy Spirit"53 Before receiving the sacrament, they respond to a three-part question when asked to confess the Father, the Son and the Spirit: "I do." "The faith of all Christians rests on the Trinity."54

2. Where does the Word Trinity come from?
The word "Trinity" comes from the Latin noun "trinitas" meaning "three are one." It was first introduced by Tertullian at the end of the 2nd century.

4. Is the Trinity a Mystery?
CCC234 The mystery of the Most Holy Trinity is the central mystery of Christian faith and life. It is the mystery of God in himself. It is therefore the source of all the other mysteries of faith, the light that enlightens them. It is the most fundamental and essential teaching in the "hierarchy of the truths of faith".56 The whole history of salvation is identical with the history of the way and the means by which the one true God, Father, Son and Holy Spirit, reveals himself to men "and reconciles and unites with himself those who turn away from sin".57
5. Where does the Trinity appear in the Bible?
The Trinity is mentioned in the Bible: "Go therefore and make disciples of all nations, baptizing them in the name of the Father and of the Son and of the Holy Spirit ... (Matthew 28:19, ESV)
Jesus said, "But when the Helper comes, whom I will send to you from the Father, the Spirit of truth, who proceeds from the Father, he will bear witness about me." (John 15:26, ESV) The grace of the Lord Jesus Christ and the love of God and the fellowship of the Holy Spirit be with you all. (2 Corinthians 13:14, ESV)

6. Is the Trinity One or Three Gods?
CCC 253 The Trinity is One. We do not confess three Gods, but one God in three persons, the "consubstantial Trinity".83 The divine persons do not share the one divinity among themselves but each of them is God whole and entire: "The Father is that which the Son is, the Son that which the Father is, the Father and the Son that which the Holy Spirit is, i.e. by nature one God."84 In the words of the Fourth Lateran Council (1215), "Each of the persons is that supreme reality, viz., the divine substance, essence or nature."85
CCC 254 The divine persons are really distinct from one another. "God is one but not solitary."86 "Father", "Son", "Holy Spirit" are not simply names designating modalities of the divine being, for they are really distinct from one another: "He is not the Father who is the Son, nor is the Son he who is the Father, nor is the Holy Spirit he who is the Father or the Son."87 They are distinct from one another in their relations of origin: "It is the Father who generates, the Son who is begotten, and the Holy Spirit who proceeds."88 The divine Unity is Triune.
7. Is the Trinity found in the Old Testament?
Yes, the Old Testament has Bible Verses referring to the Trinity including Genesis 1:26, Genesis 3:22, Deuteronomy 6:4.

8. What is the Nicene Creed?
(Shortened From the Catholic Encyclopedia) The Nicene Creed, as approved in amplified form at the Council of Constantinople (381), is the profession of the Christian Faith common to the Catholic Church, to all the Eastern Churches separated from Rome, and to most of the Protestant denominations. It expresses Belief in the Holy Trinity:
We believe (I believe) in one God, the Father Almighty, maker of heaven and earth, and of all things visible and invisible. And in one Lord Jesus Christ, the only begotten Son of God, and born of the Father before all ages. (God of God) light of light, true God of true God. Begotten not made, consubstantial to the Father, by whom all things were made. Who for us men and for our salvation came down from heaven. And was incarnate of the Holy Ghost and of the Virgin Mary and was made man; was crucified also for us under Pontius Pilate, suffered and was buried; and the third day rose again according to the Scriptures. And ascended into heaven, sits at the right hand of the Father, and shall come again with glory to judge the living and the dead, of whose Kingdom there shall be no end. And (I believe) in the Holy Ghost, the Lord and Giver of life, who proceeds from the Father (and the Son), who together with the Father and the Son is to be adored and glorified, who spoke by the Prophets. And one holy, catholic, and apostolic Church. We confess (I confess) one baptism for the remission of sins. And we look for (I look for) the resurrection of the dead and the life of the world to come. Amen."
9. Has the Church always believed in the Trinity?
Yes, the Catholic Church has always believed in the Trinity. The Solemnity of the Most Holy Trinity was established as a Double of the Second Class by Pope John XXII it is celebrated on the Sunday after Pentecost. It was made a Double of the First Class by Pope Pius X on 24 July 1911.The  liturgical color is white.
10. When was the term Trinity first Recorded?
The first time the Greek word was used was in the works of  Theophilus of Antioch in about 170.

See Also:  Powerful #Prayers to the Most #HolyTrinity with #Novena and #Litany Prayers to SHARE https://www.catholicnewsworld.com/2021/05/powerful-prayer-to-most-holy-trinity.html
CCC refers to sections of the Catechism of the Catholic Church