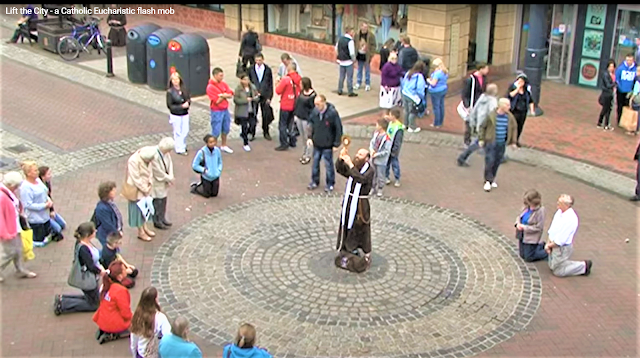 A Eucharistic flash mob occurred in the centre of a city and was organised by the Capuchin Franciscans on Ascension Thursday 2011.
According to this Youtube page a small team of Catholic evangelists mingled with the crowd to hand out cards and explain what was going on.
Here are some of the reactions.... "What is this about? What is happening? What is this about?"
One young girl said: "I've not seen anything like this since Church." "Are they doing this all day? ... Will they be doing it again? ... Are they doing this any where else?"
Two young women asked: "Why does God allow hurt and pain in the world?" They agreed it was not God's fault but ours. Then they asked: "Why doesn't Jesus come again?" We explained that He is here in the form of bread, but would come again and we invited them to think about Him now. "Is it religious? What is inside that thing?"
A man said: "What is that guy doing?" An old woman with him replied: "That's Jesus. Show respect." "This is so moving! It is the first time I have seen it done outside. I can't wait to tell my parish priest!"