#BreakingNews 3 More Catholic Churches in the USA Vandalized, Within in a Week, with Graffiti 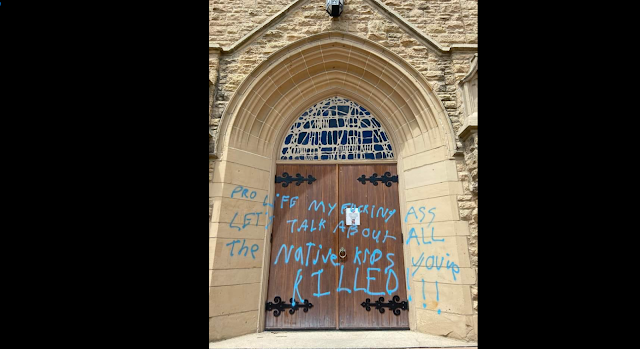 In the last week, 3 Catholic churches in the USA have been vandalized, 2 with pro-choice graffiti and one with a suspected burglary. St. Bernard Catholic Church in Madison, Wisconsin, was vandalized on the 2nd of July  with pro-choice graffiti. (Facebook Image above)  The graffiti was found on the church’s front door and on a sign. The Madison Police Department is investigating the matter and asking anyone with information to report it to Madison Area Crime Stoppers at 608-266-6014. In a statement, Father Michael Radowicz, parish priest of the church, said:
“Dear Friends, “But I tell you, love your enemies, and pray for those who persecute you.” Familiar words from the gospel of St. Matthew. It’s one thing to hear them and to obey them in theory; it’s something entirely different to actually live them out. With the events of this past week, we’ve all been given that opportunity. The graffiti on the front doors of the church was one of several instances across the nation as tensions rise over the recent Supreme Court ruling. Or ... perhaps the recent ruling was simply an excuse for someone to lash out in anger. Whatever the cause, we do exactly what I had mentioned in my prepared statement when this all happened: we pray. The amount of clean-up work is significant, but we have wonderful people who are coming to help us. I’ve received notes from people across the country offering words of support and offers of financial assistance. “Where sin abounds, grace abounds all the more.”
**** 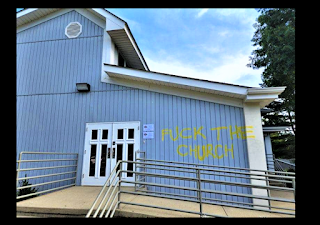 Holy Family Catholic Church in Hillsborough, North Carolina was vandalized with pro-choice graffiti on the 3rd of July. (See image at left)
The Church's Facebook page wrote: “Thanks to the men of our parish who helped to clean up this afternoon after our church was vandalized last night…. At approximately 12:15 am our church received some spray paint, and after Spanish Mass, a big dose of Love.”
The South Bend Police Department in South Bend, Indiana, on June 30th learned of a possible burglary at Our Lady of Hungary Catholic Church. Pictures of the church were posted on Twitter by ABC 57 (showing graffiti saying "I love abortion):

Heartbreaking to see in a house of God.

Someone vandalized Our Lady of Hungary Church on W. Calvert.

SBPD’s Property Crimes Unit is investigating as a possible burglary.