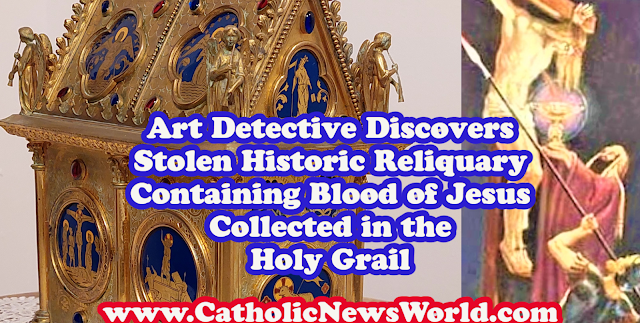 In early June, a reliquary of the "Precious Blood" of Christ was stolen from the abbey of the Holy Trinity in Fécamp, France. The reliquary was later found by Arthur Brand, a Dutch detective specializing in works of art; apparently the thieves thought they were cursed.
"We feared that it would never appear", said Msgr. Brunin, the bishop of Le Havre.
In the announcement that the relic of the "Precious Blood", stolen from Fécamp (Seine-Maritime), Mgr Jean-Luc Brunin, the Bishop of Le Havre, was saddened.

"This theft occurs a few days before the Feast where the relic is venerated by the population of Fécamp. By strongly condemning this act of vandalism, I want to assure the Fécampoises and Fécampois of my closeness and my deep sympathy. The Precious Blood is an ancient faith tradition dating from the twelfth century. This theft is an unbearable attack on the faith of all people who remember the Salvation obtained by the sacrifice of Christ."
The  reliquary of the "Precious Blood," stolen in early June from the abbey of the Holy Trinity in Fécamp, was found in Amsterdam (Netherlands) in early July. Mgr Brunin, the bishop of Le Havre exclaimed: “I was surprised, like many, by this announcement that the relic of the Precious Blood had been found. We feared it was gone forever. » The theft occurred without breaking and entering, then all of a sudden it reappeared on the doorstep of Arthur Brand.
Arthur Brand explained, “this person was approaching me on behalf of another, at whose home the stolen relics were being stored,” Brand told France24. “To have the ultimate relic, the blood of Jesus in your home–stolen–that’s a curse,” he explained. “When they realized what it was, that you in fact cannot sell it, they knew they had to get rid of it.”

I recovered the legendary ‘Blood of Jesus' of Fécamp ('Précieux Sang’), one of the oldest and holiest relics of the Catholic Church. Said to contain blood drops of Jesus Christ, collected in the Holy Grail from his wounds at the Cross. Stolen on June 2nd 2022 in France. AMEN! pic.twitter.com/YhgK8RaUaf

“For the time being, we do not know exactly how it will happen, or when the Precious Blood will be able to return to Fécamp”, said the communication manager of the diocese. The only certainty, "the return of the relic, when the findings and verifications will be made by the police, will be the occasion for a celebration of thanksgiving", explained Bishop Brunin. With the hope that it can take place by September.
Inside the reliquary, are devotional objects - two small metal vials which would contain a few drops of the blood of Christ - which have been celebrated since the end of the 12th century. Bishop of Le Havre pointed out: “This news also made me very happy for the population of Fécamp, and not only the Catholic community. The devotion to the “Precious Blood” is a very old tradition, it belongs to the history of the city and has nourished the faith of generations of believers”.
Sources: https://www.tendanceouest.com/actualite-398617-religion-le-reliquaire-du-precieux-sang-vole-a-l-abbatiale-de-fecamp
Le Parisien and Twitter account of Arthur Brand