Father Luigi Brenna; is a Catholic Missionary Priest from Italy who lives in Nigeria, Africa. He almost lost his life on July 4th, 2022, by Fulani Herdsmen who attacked him in his community in Benin.
Fr. Luigi fought off his kidnappers who left him when they thought he was dead. (SEE Press Release from the Archdiocese of Benin below with further details)
Fr. Luigi was stabbed severely with a machete by five kidnappers. A priest named Fr. Albert Nwosu', on Facebook wrote that he saw Fr. Luigi, who reportedly said, "Dear Albert, they stabbed me, beat me, flogged me, but I will endure them because the ones Christ suffered was worse."
Please Pray for the recovery of Fr. Luigi!
The Somascan Fathers (abbreviated CRS), is an order of clerics regular of Pontifical Right for men, which was founded in Italy in the 16th century by St. Jerome Emiliani and named after the motherhouse at Somasca. 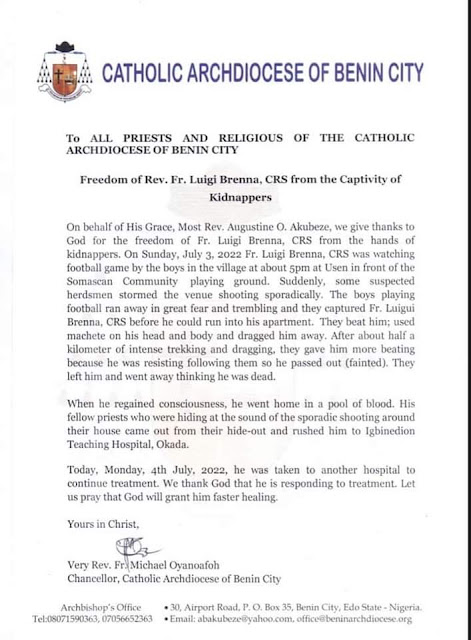