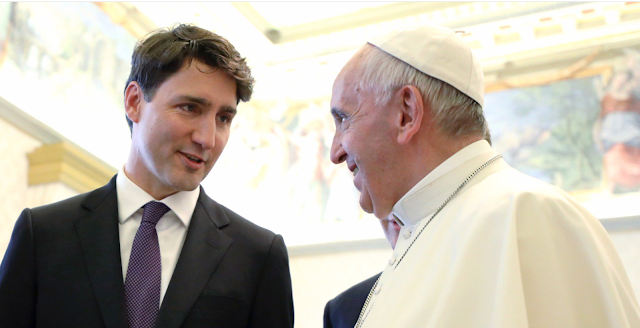 Pope Francis Arrives in Canada - WATCH Live Welcome Ceremony from the Airport in Edmonton, Alberta, Canada. The Holy Father is on his 37th Apostolic Journey, marking his 56th country visited.This penitential pilgrimage to the nation is aimed at reconciliation and healing with the country's indigenous peoples.
The papal motorcade makes its way to St. Joseph Seminary, where the pope and support staff will stay during the Alberta leg of the visit. More information about St. Joseph Seminary can be found here.
Significant members of the “seguito” or papal entourage include: 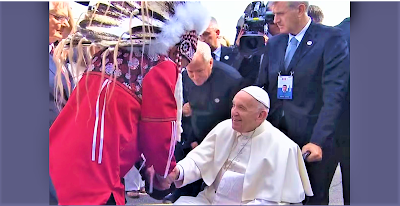 Cardinal Pietro Parolin, Secretary of State, Archbishop Edgar Peña Parra, Substitute of the Secretariat of State, Archbishop Paul Richard Gallagher, Secretary for Relations with States and International OrganizationsTwo Canadian Cardinals working in Rome are also part of the papal entourage: Cardinal Marc Ouellet, Prefect of the Dicastery for Bishops  and Cardinal Michael Czerny, Prefect of the Dicastery for Promoting Integral Human DevelopmentUpon arrival, the Apostolic Nuncio to Canada (Archbishop Ivan Jurkovič) and the Head of Protocol for the Government of Canada (Mr. Stewart Wheeler) board the plane via the front staircase to greet the Holy Father, while media traveling with the pope exit from the back stairs. An ambulift (positioned at the back of the aircraft) will assist the Holy Father in deplaning before he enters a small FIAT 500X. He will then be transported to the airport hangar for the official arrival ceremony, greeted first by the Governor General and Prime Minister. A six person drum circle with singers/drummers from Alexis Nation (Logan Alexis Singers who are part of Treaty 6) will be in place to welcome Pope Francis. An arrival guard is in place to welcome the Holy Father with soldiers from 1 Canadian Mechanized Brigade Group (1 CMBG). Members of the welcome party include (may be subject to change):  After greeting members of the official welcoming party, the Governor General and Prime Minister share some brief private moments with Pope Francis while members of the papal motorcade prepare to depart.