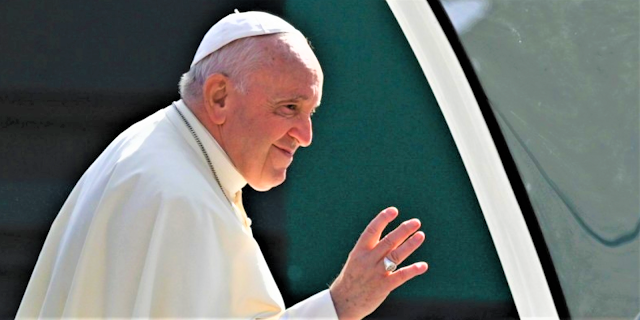 WATCH Live Pope Francis at Mass for Reconciliation with Indigenous in Quebec Canada. Push Play on the Video Below for the Mass Video:
SEE ALSO : FULL TEXT - Pope Francis' Homily "Reconciled with God, with others...
https://www.catholicnewsworld.com/2022/07/full-text-pope-francis-homily.html
Saint Anne de Beaupré - It was in 1658 that Bretons at sea, saved by their prayers to Saint Anne, launched the project to build a shrine in her honour. In 1658, Étienne de Lessard, one of the first settlers, granted some land for the construction of the first wooden chapel dedicated to Saint Anne, who was particularly venerated in New France.

This historic Mass for Reconciliation will take place in the National Basilica dedicated to the grandmother of Christ, Saint Anne. This is a continuation of the theme as experienced in Alberta at the traditional pilgrimage site of Lac St. Anne, where again, we will find ourselves in the midst of a traditional pilgrimage here at this site.
For many generations, Indigenous People have traveled to this Church in the last week of July to take part in the festivities surrounding the celebration of the Feast Day of Saint Anne on July the 26th, this year being no exception.

Many Indigenous people have been camped out in the vicinity of this Basilica in every direction for days and will presumably remain for some days to come.

Upon arrival at the site, the first order of business is a giro, “a tour among the Faithful”, in the Popemobile where the Holy Father will greet those who are assembled around the building, after which he will make his way into the Basilica to prepare for the celebration of the Mass.

Note: Refer back to commentary for the Holy Mass and Commonwealth Stadium for general information about the nature of the liturgy. Note that the vestments for this Mass are different and the Deacons serving are not Indigenous.

This Mass will be celebrated in a non-customary way by using the optional ritual for praying for the intention of Reconciliation. This is meant to remind us of the primary theme of the Pope's journey here to Canada and no less important and relevant here in Quebec.

The intention for today’s Mass is that people may be reconciled with each other and to the Church. This idea is reflected in the scripture that has been chosen.

The Pope's chasuble was specially designed by a local Huron-Wendat artist.  Many of the speakers at the heart of the liturgy are from Indigenous communities, offering readings, prayers or participating presenting the offertory gifts during the Mass.
Élisabeth, Jeannette and Solange Vollant are three sisters from Pessamit who will lead the offertory hymn in the Innu language. The other songs are taken from the francophone repertoire of Eastern Canada and will be performed by the local choir, enriched by other singers for the occasion.

The First Reading from the Book of Genesis contains a passage from Scripture that harkens back to the apology offered by Pope Francis to the delegation of Indigenous Leaders who visited him on the 1st April in the Vatican, the first time at which he declared his intention to travel to Canada as we welcome him here now.

In this Reading, God is said to have asked the question to Adam and Eve after they have just sinned. “Where are you?” The Holy Father had reflected upon this passage in his original apology address, where he reminds us how after we have sinned, we have the tendency to hide, but that our healing comes in presenting ourselves before the Lord.

The Gospel passage is a favorite, during which we hear of the account on the morning of Jesus' resurrection from the dead, meeting with people who are walking to a village in nearby Jerusalem.

The theme of this week ‘Walking Together' or ‘Marcher Ensemble’ reflects this experience, familiar to the disciples of Jesus, always walking with him as we hear about in the Gospel, listening to Him, learning from Him, confronting challenges among themselves and in their surroundings, ultimately seeking to be accompanied by Him. This is the prayer of the pope for the people of this country, especially the Indigenous People.

All other elements in the celebration of this Mass remain the same as in Commonwealth Stadium, including the specially designed vestments by a local artist of the Huron-Wendat Territory. At the conclusion of this Mass, His Eminence, Cardinal Lacroix, the Archbishop of Quebec City, will extend words of thanksgiving to the Holy Father for his presence on this day.

And after the final blessing, the Holy Father will turn to view the traditional and magnificent sculpture of Saint Anne holding in her arms the young child Mary, her daughter.  This is a unique representation as Mary is not frequently depicted as a young child herself.

The Holy Father will listen as the choir sings a traditional hymn in honor of the patroness of the Basilica Saint Anne. He will then depart the sanctuary and proceed directly to the sacristy where he will remove his vestments prior to returning via motorcade to Quebec City.