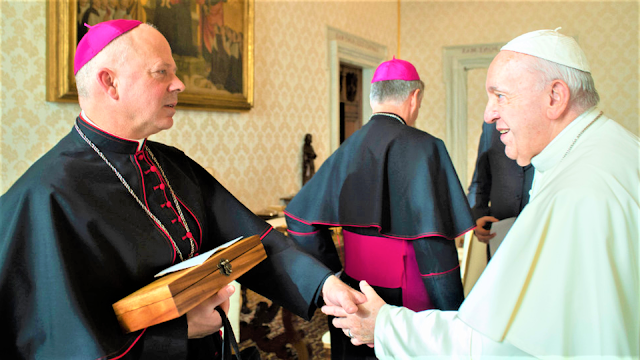 The biography for Bishop Zielinski may be found here. (see below)

The Diocese of New Ulm is comprised of 9,863 square miles in the State of Minnesota and has a total population of 279,681 of which 49,530 are Catholic. USCCB Release
Vatican Release: Appointment of bishop of New Ulm, U.S.A.
The Holy Father has appointed Bishop Chad William Zielinski of Fairbanks as bishop of New Ulm, United States of America. Curriculum vitae
Bishop Chad William Zielinski was born on 8 September 1964 in Detroit, Michigan. He carried out his ecclesiastical studies at the Mount Saint Angel Seminary in Saint Benedict, Oregon, and at the Sacred Heart Major Seminary in Detroit. He was ordained a priest on 8 June 1996 for the diocese of Gaylord, Michigan.
Since priestly ordination, he has held the following offices: deputy parish priest of the Immaculate Conception parish in Traverse City (1996-1998) and parish priest of the Saint Philip Neri parish in Empire and the Saint Rita-Saint Joseph parish in Maple City (1998-2000). He has also been a member of the Presbyteral Council and head of mission for Spanish-speaking faithful. From 2000 to 2014 he was chaplain of the armed forces, serving in various countries in the Middle East. He has also been vocational director for the Military Archdiocese of the United States, and in 2013 he obtained the rank of Major. On 8 November 2014 he was appointed bishop of Fairbanks, receiving episcopal consecration the following 15 December.