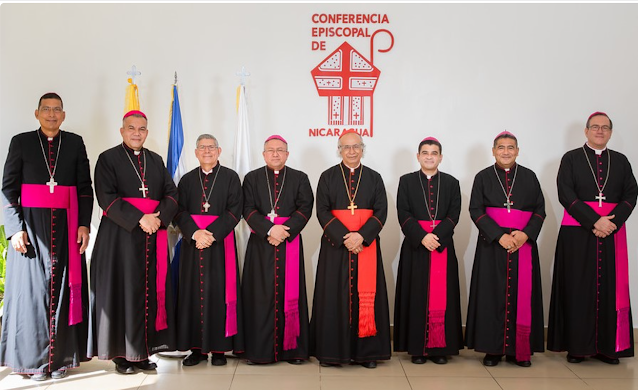 Due to the ongoing persecution of the Catholic Church in Nicaragua by the government Bishops' Conferences in Brazil and Costa Rica have voiced their solidarity. (See Statements below) The government has in has arrested a bishop, Monsignor Rolando Álvarez, several and seminarians; closed eight radio stations linked to the Church and expelled the Missionaries of Charity of Saint Teresa from the country. There are also reports of attacks and destruction of Catholic religious images and symbols.
“We feel deeply united to the brother bishops and to the entire Nicaraguan people”, said the Presidency of the National Conference of Bishops of Brazil (CNBB) in a letter sent last Monday, 15th, to the Bishop of Jinotega and President of the Episcopal Conference. of Nicaragua, Archbishop Carlos Enrique Herrera Gutiérrez. “We cry out to the Good Lord for peace and justice to be achieved”, pray the Brazilian bishops in the face of “the events that have marked the life of the Church in Nicaragua”.
FULL TEXT Letter: Unity and Solidarity with the Church in Nicaragua dear brother, “If one member of the body suffers, the whole body suffers equally!” (1 Cor 12.26) We, the Bishops of Brazil, accompany with sadness and concern the events that have marked the life of the Church in Nicaragua. We feel deeply united with our brother bishops and with the entire Nicaraguan people. We cry out to the Good God for peace and justice to be achieved.
In prayer and brotherhood,
Dom Walmor Oliveira de Azevedo, Archbishop of Belo Horizonte (MG) President of CNBB
Archbishop Jaime Spengler, Archbishop of Porto Alegre (RS) First Vice-President of the CNBB
Dom Mário Antônio da Silva, Archbishop of Cuiabá (MT) Second Vice-President of the CNBB
Bishop Joel Portella Amado, Auxiliary Bishop of the Archdiocese of São Sebastião do Rio de Janeiro (RJ) Secretary General of the CNBB
Source: https://www.cnbb.org.br/presidencia-cnbb-carta-unidade-solidariedade-igreja-nicaragua/

Bishops of the Episcopal Conference of Costa Rica
they stand in solidarity with the Church in Nicaragua.
August 19, 2022.
Given the events of the last hours that indicate the arrest of Monsignor
Rolando Álvarez, Bishops of Matagalpa, Nicaragua, the Conference Bishops
Episcopal Church of Costa Rica stand in solidarity and offer a prayer to the Lord of peace in these
moments of pain and uncertainty.
We call for respect for religious freedom, the dignity of people and the
mission of the Church carried out in Nicaragua by lay faithful, men and women religious,
priests and bishops.
The pastors of the Costa Rican Church ask Jesus Christ, Prince of Peace, to
he grant this gift to our sister nation.
We are confident in the promise of the Lord "I will be with you until the end of time."
world” (Matthew 28, 20), and we remain hopeful that he will manifest the strength of him and his
grace from him to overcome the moments of tribulation.
We maintain our call to remain united in prayer throughout our country,
especially so that we can continue to do it in our communities
parish churches, invoking peace.
About the Episcopal Conference of Costa Rica
More information: church:
Facebook: Communication Episcopal Conference of Costa Rica
Youtube: Channel Episcopal Conference of Costa Rica
Press contact: Licda. Lisandra Chavez
Telephone: (506) 22213053. Email: Ichaves(Diglesiacr.org
Central: (506) 2221-3053 / (506) 2222-0486 *Fax: (506) 2221-6662
Email: seccecorl (Viglesiacr.org