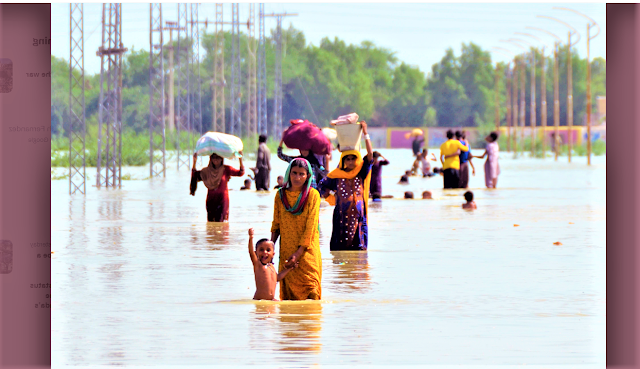 The death toll of the devastating floods in Pakistan, Asia, has reached over 1,000 dead so far.
Authorities expect more flooding from the north. Prime Minister Sharif compared the current situation to the 2010 floods in which about 2,000 people died. The losses could amount to up to 10 billion dollars.
The Archbishop of Karachi, Pakistan, Msgr. Benny Travas, also directs Caritas Pakistan, also says:  "Caritas Pakistan receives many requests from parishes, congregations, civil protection committees and district governments. The Caritas office staff in the Diocese of Karachi have already started to examine the requests and to provide assistance; I urgently appeal for support and invite people of good will to donate money or material help". Pakistan recorded a total of 375.4mm of rain, nearly triple the national average over the past 30 years.
DONATE via Online to Caritas for Pakistan: https://www.caritas.org/pakistan-floods-2022/
Asia News reports that from the floods in Pakistan more than 1,000 people have died, the National Disaster Management Authority has announced, nearly 120 people have died in the last 24 hours alone.
After his Angelus, on Sunday, Pope Francis prayed for Pakistan. He said, "...I want to assure the people of Pakistan, hit by floods of disastrous proportions, of my nearness. I pray for the numerous victims, for the wounded and those forced from their homes, and that international solidarity might be prompt and generous."
According to the United Nations Office for the Coordination of Humanitarian Affairs (OCHA), since mid-June more than 2.3 million people have been affected by the torrential rains, but in recent days government officials had raised that number to at least 30 million Pakistanis, or 15% of the population, calling the situation a 'climate-induced humanitarian disaster of epic proportions'.
At least 95,000 homes have been destroyed and over 504,000 livestock have been killed. Relief helicopters are struggling to find terrain on which to land to deliver aid.
The southern provinces of Sindh and Belucistan, which have experienced above-average monsoon rains this year, are the worst affected. Sindh recorded 784% more rain than normal and Belucistan 500%.
The melting of glaciers in the northern region of Gilgit Baltistan, generated glacial flooding.
In a series of chain events, not only is it raining more than usual, but the water reserves in the Pakistani mountains on the border with India are also falling on the population.

Years of neglect could mean that the dams will not hold the record volumes expected in the coming days. At the moment, all floodgates have been opened to allow the flow of 600,000 cubic metres of water per second.
The prices of foodstuffs that are still available have skyrocketed.
The losses could cost the country up to USD 10 billion and come at a time when the economy is already on its knees due to high inflation rates and a shortage of foreign currency.
Local officials argue that Pakistan is unfairly bearing the consequences of climate change fuelled elsewhere in the world. In the ranking compiled by the NGO Germanwatch, the country is ranked eighth most vulnerable to extreme weather conditions.
Prime Minister Shehbaz Sharif said that the damage suffered so far is comparable to that of the 2010 floods, in which around 2,000 people died.
Edited from Asia News and Vatican Excerpt and Fides.org