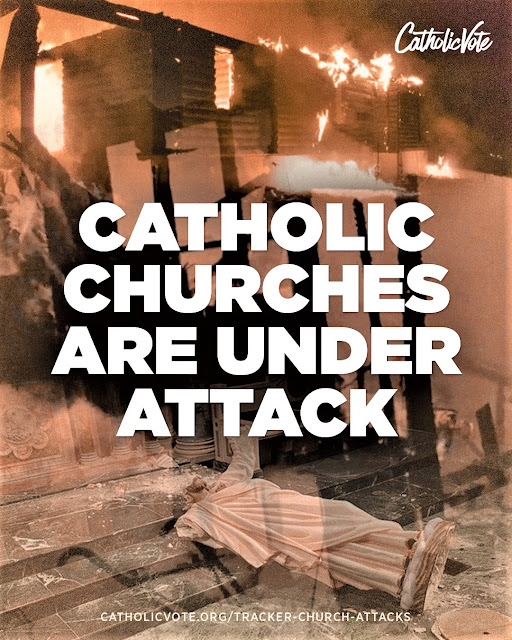 The organization Catholic Vote has launched a campaign to pressure the government to  to speak out against attacks on over 70 churches and pregnancy centres since May. Earlier a letter was sent to Attorney General Merrick Garland asking for protection from the Department of Justice, this was signed by CV's Brian Burch, signed by the USCCB and other pro-lifers,  who saw the need for public denunciation of the attacks against churches and pro-life organizations.
CV writes:
On Wednesday, we announced our single largest media campaign ever – with a commitment of $1 million – to bring needed pressure on President Biden and those in his administration who refuse to speak out against the rise in abortion terrorism targeting judges, churches, and pregnancy resource centers. (See Tracker Map at Bottom)
Watch their new ad here
Maybe you know the stats already. But we can’t repeat them enough:
Since 2020, over 200 Catholic churches have been desecrated, vandalized, firebombed, and more. Just last week, a drive-by gunman fired bullets into the Assumption of the Blessed Virgin Mary Church in Colorado. Did you hear about that on the mainstream news?
Since the illegal leak of the Dobbs decision, at least 64 pregnancy resource centers have been attacked, bombed, or vandalized, causing millions of dollars in damage. Apparently free counseling and diapers are a real threat…
And here’s the kicker…
While there are some exceptions, the vast majority of these cases have not had any arrests or prosecutions for these crimes.
We’ve written to the attorney general. We organized a coalition of groups urging him to act. We’ve lobbied the White House. We’ve called on our leaders to address this pattern of vandalism and violence. But alas, they have other priorities…
… like using the FBI to investigate parents concerned about CRT in schools and the sexual exploitation of their children.
These are dark and violent times. And our leaders are failing us.
Most priests and bishops don’t know what to do.
So it’s up to us – the laity – to stand up and defend our churches, statues, shrines, and centers that support women in need.
CV notes:
Since civil unrest began on May 28, 2020, there have been at least 207 attacks against Catholic churches in the United States, including arson attacks which damaged or destroyed historic churches; spray-painting and graffiti of satanic messages; rocks and bricks thrown through windows; and statues destroyed (often with heads cut off). A new spate of at least 70 attacks has occurred since the draft Supreme Court opinion proposing to reverse Roe v. Wade was leaked in early May 2022, with many including graffiti with pro-abortion messages. Crucially, while a handful of the attacks have included thefts, the vast majority have only involved property destruction, indicating that the motive is not primarily material gain.
The attacks on Catholic churches have been widespread across the country, affecting 38 states. Hotspots with large clusters of attacks include New York City (19); Denver (10); Los Angeles (10); the D.C. area (9); Portland, Oregon (8); Seattle (7); Boston (7); Houston (4); Philadelphia (4); and Miami/South Florida (4). Some of the churches have been attacked multiple times.
Sources: https://catholicvote.org/tracker-church-attacks/
https://catholicvote.org/stop-the-violence/