Pope Francis to Meet Actors Denzel Washington, Patricia Heaton and Other Artists at the 1st Ever "Vitae Summit" at the Vatican 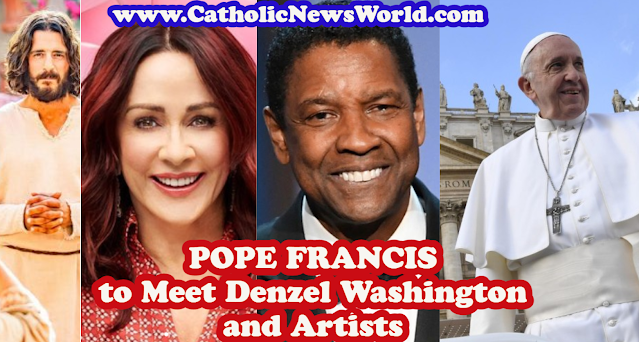 The Vatican has announced that World-renowned artists will participate in the first ever Vatican ‘Vitae Summit.’ The famous artists from around the world, include Denzel Washington, Andrea Bocelli, and Patricia Heaton, Jonathan Roumie and more, who will join Pope Francis at the Vatican on August 31st to September 1st. They will discuss how to use the arts to foster a culture of hope and unity.
The two-day summit, on August 31 – September 1, by the Vitae Global Foundation will occur in the Casina Pio IV which is in the walls of Vatican City. Participates include arts, media, and entertainment professionals who will join Pope Francis to discuss how to “leverage the arts, media, and entertainment to trigger a cultural transformation that promotes the common good, universal values, and an encounter between people.”
On Tuesday, the VITAE Global organization announced the guest list of summit participants (found below).
VITAE Summit guest list Jessica Oyelowo, David Oyelowo, Edwina Findley, Jonathan Roumie, Patricia Heaton, Eduardo Verastegui Denzel Washington, Hayley Atwell, Darius Marder, Issac Chung Pete Doctor, Pauletta Washington, Dan Lin, Marcus Mumford, Andrea Boccelli, J Balvin, Bull Nene, Alessia Cara, Julio Reyes, Copello Eva Cavalli, Alexander Acha, Alejandro Roemmers.
Hope, unity, and the common good are the main themes of the summit with the goal of inspiring a change in the world through art. The summit is the culmination of several years of meetings with Pope Francis in his Vatican residence, the Casa Santa Marta, with the VITAE Global founder and president Luis Quinelli and his executive team. Mr. Quinelli says, “Our intention is to create an opportunity where the participants, with the presence and inspiration of the Holy Father, will be able to share experiences, opinions and to collaboratively find messages that spark inspiration.” Beauty, continued Mr. Quinelli, is an incredibly powerful force that can help elevate people’s spirits, “bring healing to the soul, reconciliation to relationships and renewed hope in the face of challenges.”
The VITAE Global Foundation is a non-profit organization made up of artists, executives, and world leaders who aim to make a positive impact on people through the arts, mass media, and entertainment. According to the foundation, VITAE has promoted various cultural projects and initiatives in recent years which have “positively impacted hundreds of thousands of people around the world, generating multiple points of rapprochement, and embracing differences to combat the polarization and hatred that threatens today’s society.”
Edited from Vatican News