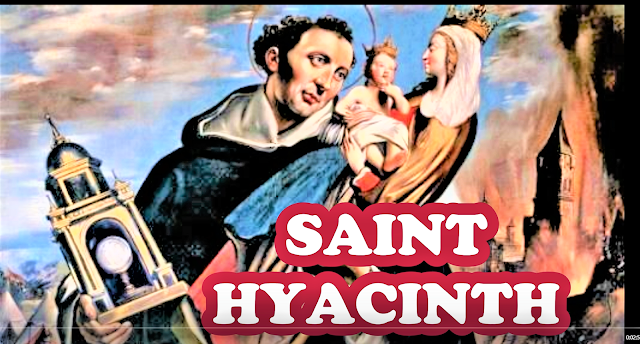 Saint Hyacinth,  a Dominican Priest of Poland,  who Died in 1257.

Saint Hyacinth was Canonized on the 17th of April,  in 1594, by Pope Clement VIII.  He was called the Apostle of the North.

A near relative of Saint Ceslaus,   he made his studies at Cracow,   Prague,   and Bologna,   and at the latter place merited the title of Doctor of Law and Divinity.   On his return to Poland he was given a prebend at Sandomir.   He subsequently accompanied his uncle Ivo Konski,   the Bishop of Cracow,   to Rome,   where he met Saint Dominic,   and was one of the first to receive at his hands (at Santa Sabina,   1220) the habit of the newly established Order of Friars Preachers.   After his novitiate he made his religious profession,   and was made superior of the little band of missionaries sent to Poland to preach.   On the way he was able to establish a convent of his order at Friesach in Carinthia.   Hyacinth baptized over 120,000 people.

During a Mongol attack on Kiev,   as the friars prepared to flee the invading forces,   Hyacinth went to save the ciborium containing the Blessed Sacrament from the tabernacle.   In the monastery chapel,   when he heard the voice of Mary,   the mother of Jesus,   asking him to take her,   too.

Hyacinth lifted the large,   stone statue of Mary,   as well as the ciborium.   He was easily able to carry both,   despite the fact that the statue weighed far more than he could normally lift.   Thus,   he saved them both.

Once while visiting Kościelec,   a hailstorm broke out,   destroying crops and leaving people with the terrible prospect of poverty and famine.   Hyacinth told them to pray.   The next day,   the crops were miraculously restored.   The people then treated Hyacinth to pierogi as a token of gratitude.

In Poland the new preachers were favourably received and their sermons were productive of much good.   Hyacinth founded communities at Sandomir,   Cracow,   and at Plocko on the Vistula in Moravia.   He extended his missionary work through Prussia,   Pomerania,   and Lithuania; then crossing the Baltic Sea he preached in Denmark,   Sweden,   and Norway.   Hyacinth then returned to Cracow,   which he had made the centre of his operations.   On the morning of the 15th of August he attended Matins and Mass,   received the last sacraments,   and died a saintly death.   God glorified His servant by numberless miracles,   the record of which fills many pages.   His feast day is August 17th.