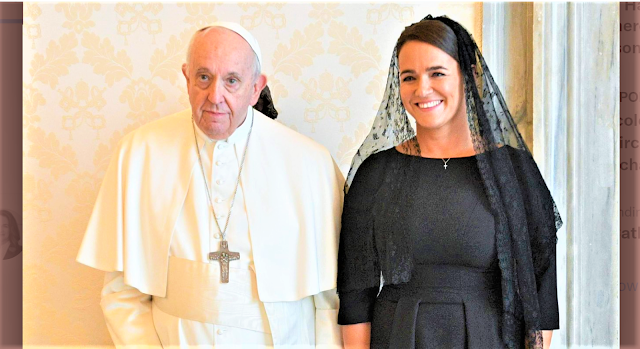 Pope Francis received President Katalin Novák and her husband on August 25th in the morning. They had a 45-minute face-to-face conversation in Spanish, without an interpreter. The encounter occured at the Vatican's Apostolic Palace. The Holy See issued a statement on the visit of the Hungarian head of state to the Vatican.
On Twitter, President Novák commented:
"During my audience @Pontifex was particularly interested in the Hungarian family policy. He welcomed the fact that the nr of marriages have doubled & abortions have halved in #Hungary. The Holy Father thanked us for standing up for traditional families and persecuted Christians."
Pope Francis blessed the couple, who celebrated their 20th year of marriage.
The Pope's visit to Budapest last September on the occasion of the 52nd International Eucharistic Congress was recalled during the discussions held in a cordial atmosphere. The parties expressed their satisfaction with the good bilateral relations. They then reviewed some issues of common interest, such as the family, the promotion of a culture of life, and the situation of young people and Christians in the Middle East. The talks also discussed the war in Ukraine and the commitment to peace, the Holy See's announcement concludes.
Gift exchange
At the end of the papal audience, gifts were exchanged. Pope Francis presented the Hungarian head of state with a bronze statue depicting a child helping another child to stand up.

At the audience with #Pope Francis @Pontifex I outlined #Hungary, the Hungarian people await the Holy Father!🇭🇺🇻🇦 pic.twitter.com/jBVaBVC5Rg

There are two inscriptions on the work: "to love" and "to help". The Pope also presented the First Lady with this year's World Day of Peace message, his document on Human Brotherhood and the volume published by the Vatican Publishing House, which commemorates the Pope's Statio Orbis ceremony held on March 27, 2020 in St. Peter's Square.
Katalin Novák presented Pope Francis with a folk-embroidered mass cloth stole, a CD recording and sheet music of Franz Liszt's piano piece "Két legenda" (Légendes), and the Talentum Hungaricum "Talent in music!" music selection with a CD recording, as well as Dr. Levente Kovács' art collection entitled "Evangélium 21".
Katalin Novák, President of the Republic of Hungary, took part in embroidering the decorations of the stole. The vestments were blessed by Cardinal Péter Erdő, Primate, Archbishop of Esztergom-Budapest.
The President said goodbye in Latin. Laudetur Iesus Christus.
After the papal audience, Katalin Novák met with Secretary of State Cardinal Pietro Parolin and Archbishop Paul Richard Gallagher, the Holy See's secretary responsible for intergovernmental relations.
Sources: Vatican News Hungarian Page, RomeReports and Twitter Page of the President of Hungary