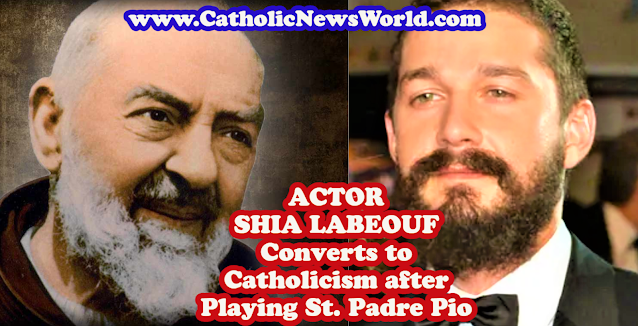 Shia LaBeouf is an American actor, who recently made a movie about St. Padre Pio. Most notably he played Louis Stevens in the Disney Channel series Even Stevens, a role for which he received 2 awards and the main character in the 2007/2009/2011 "Transformers" films.  LaBeouf was born on June 11th, 1986 in California. Shia's mother is Jewish and in Hebrew, his first name  translates to 'gift of God'. He is married to actress Mia Goth and the two have a newborn child (March 2022).
Actor Shia LaBeouf said he converted to Catholicism, in an interview with Bishop Robert Barron, while making the film 'Padre Pio'. LaBeouf was involved in some controversies in the last few years.
The actor explained, to Bishop Barron, that he was suicidal:  'I had a gun on the table. I was outta here.'
'I didn't want to be alive anymore when all this happened. Shame like I had never experienced before; the kind of shame that you forget how to breathe. You don't know where to go. You can't go outside and get like, a taco.'
(SEE 1:33 Mark on the Video Below)
He related how living in a monastery among religious, to make the film, impacted his life.
'I know now that God was using my ego to draw me to Him. Drawing me away from worldly desires. It was all happening simultaneously. But there would have been no impetus for me to get in my car, drive up (to the monastery) if I didn't think, 'Oh, I'm gonna save my career.'
LaBeouf also noted, in his interview with Barron, that the traditional form of the Catholic Latin Mass had a profound influence on his conversion and his performance playing St. Padre Pio.