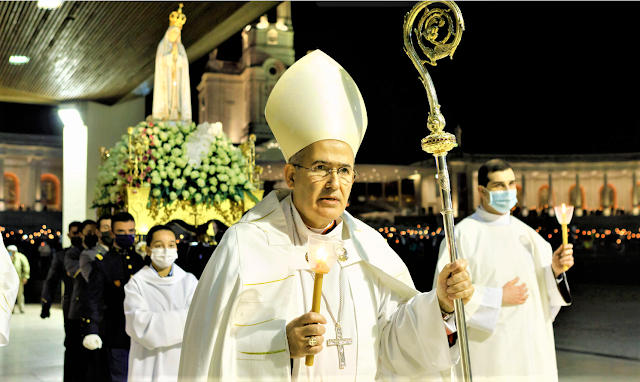 Pope Francis, on September 26th, made the Appointment of prefect of the Dicastery for Culture and Education

The Holy Father has appointed His Eminence Cardinal José Tolentino de Mendonça, until now archivist and librarian of the Holy Roman Church, as prefect of the Dicastery for Culture and Education.

Cardinal José Tolentino de Mendonça, Prefect of the Dicastery for Culture and Education, was born in Funchal, in the island of Madeira, on 15 December 1965. In 1986 he began to attend the Catholic University of Portugal in the capital, where in 1989 he obtained a licentiate in theology.

He was ordained a priest for his home diocese on 28 July 1990, and in the same year he enrolled at the Pontifical Biblical Institute in Rome, where he was awarded a licentiate in biblical sciences in 1992. In 2004, again at the Catholic University of Portugal in Lisbon, he completed his formation with a doctorate summa cum laude in biblical theology with a text on the Gospel of Luke (7: 36-50, the scene of the encounter between Jesus and the sinful woman in the house of Simon, the Pharisee), with as relator the Jesuit exegete Jean-Noël Aletti. He subsequently carried out research at the Straus Institute for the Advanced Study of Law and Justice in New York (2011-2012).

He continued to live in Funchal for the first three years of his presbyteral ministry, teaching at the diocesan seminary and continuing to collaborate with the Nossa Senhora do Livramento parish. In 1995 he transferred to the capital of Portugal, fulfilling for five years the mission of chaplain of the Catholic university. In 2001 he was sent to Rome as rector, for two years, of the Pontifical Portuguese College, and after the doctorate he became professor of New Testament and aesthetic theology in the Faculty of Theology of the Catholic University of Portugal in Lisbon (2004-2018). In the meantime he edited the journal of theological studies “Didaskalia” (2005-2012), and directed the Centre for studies of religions and cultures (2012-2017) of the same Athenaeum, and was rector of the chapel of Nossa Senhora da Bonança (2010-2018).

Appointed in 2011 as consultor of the Pontifical Council for Culture, the following year he became vice-rector of the Catholic University of Portugal, also carrying out teaching activities as a visitor in Brazil at the Catholic universities of Pernambuco and Rio de Janeiro, and at the Faculty of Philosophy and Theology of the Jesuits in Belo Horizonte.

He has published numerous volumes and articles in the theological and exegetical fields, as well as various poetic works, also drawing on literary and philosophical language. An expert in the relationship between literature and theology, in 2014 he represented Portugal in the World Poetry Day and for several years he has edited a weekly column in the newspaper “Expresso” entitled “What clouds are”.

In 2018 Pope Francis first chose him to preach, from 18 to 23 February, the spiritual exercises for the Roman Curia in Ariccia on the theme “In praise of thirst”; and then, on 26 June, he appointed him as archivist and librarian of the Holy Roman Church, elevating him at the same time to the titular see of Suava, with the dignity of archbishop.

After receiving episcopal ordination in Lisbon on 28 July 2018, from the Cardinal Patriarch Manuel Clemente – conconsecrated by Cardinal António Augusto dos Santos Marto, ordinary of Leiria-Fátima, and the bishop emeritus of Funchal, Teodoro de Faría – he chose as his motto Considerate lilia agri, “Consider the lilies of the field”, taken from the Sermon on the Mount (Matthew 6: 28).

On 26 September 2022 The Holy Father has appointed  Cardinal José Tolentino de Mendonça, until now archivist and librarian of the Holy Roman Church, as prefect of the Dicastery for Culture and Education.

Created and proclaimed Cardinal by Pope Francis in the consistory of 5 October 2019, of the Deaconry of Santi Domenico e Sisto.