Saint September 13 : St. John Chrysostom Known as the "Golden-Mouthed" who was a Doctor of the Church and the Patron of Education, Epilepsy and Preachers 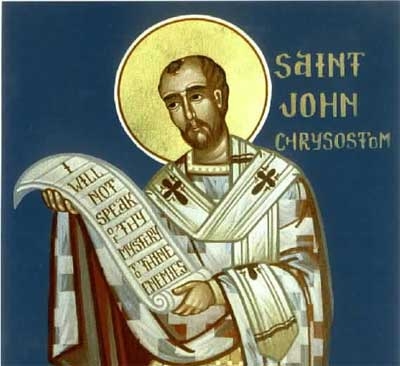 (Chrysostomos, "golden-mouthed" so called on account of his eloquence).

Doctor of the Church, born at Antioch, c. 347; died at Commana in Pontus, 14 September, 407.John — whose surname "Chrysostom" occurs for the first time in the "Constitution" of Pope Vigilius (cf. P.L., LX, 217) in the year 553 — is generally considered the most prominent doctor of the Greek Church and the greatest preacher ever heard in a Christian pulpit. His natural gifts, as well as exterior circumstances, helped him to become what he was.