Saint September 14 : The Exaltation of the Holy Cross Feast - Remembering the Cross that Jesus Died on for Our Sins 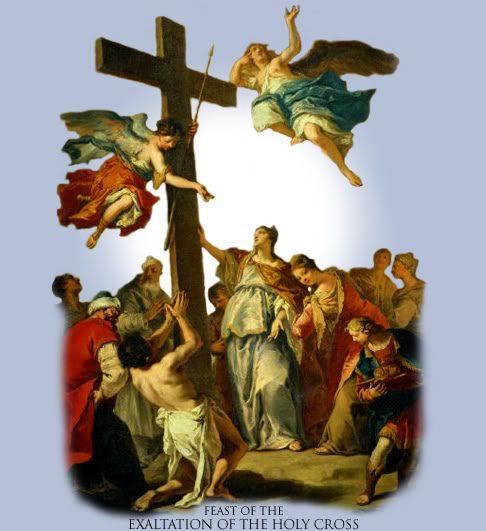 The Feast of the Cross like so many other liturgical feasts, had its origin at Jerusalem, and is connected with the commemoration of the Finding of the Cross and the building, by Constantine, of churches upon the sites of the Holy Sepulchre and Calvary. In 335 the dedication of these churches was celebrated with great solemnity by the bishops who had assisted at the Council of Tyre, and a great number of other bishops. This dedication took place on the 13th and 14th of September. This feast of the dedication, which fwas known by the name of the Encnia, was most solemn; it was on an equal footing with those of the Epiphany and Easter. The description of it should be read in the "Peregrinatio", which is of great value upon this subject of liturgical origins. This solemnity attracted to Jerusalem a great number of monks, from Mesopotamia, from Syria, from Egypt, from the Thebaïd, and from other provinces, besides laity of both sexes. Not fewer than forty or fifty bishops would journey from their dioceses to be present at Jerusalem for the event. The feast was considered as of obligation, "and he thinks himself guilty of a grave sin who during this period does not attend the great solemnity". It lasted eight days. In Jerusalem, then, this feast bore an entirely local character. It passed, like so many other feasts, to Constantinople and thence to Rome. There was also an endeavour to give it a local feeling, and the church of "The Holy Cross in Jerusalem" as intended, as its name indicates, to recall the memory of the church at Jerusalem bearing the same dedication.

The feast of the Exaltation of the Cross sprang into existence at Rome at the end of the seventh century. Allusion is made to it during the pontificate of Sergius I (687-701) but, as Dom Bäumer observes, the very terms of the text (Lib. Pontif., I, 374, 378) show that the feast already existed. It is, then, inexact, as has often been pointed out, to attribute the introduction of it to this pope. The Gallican churches, which, at the period here referred to, do not yet know of this feast of the 14th September, have another on the 3rd of May of the same signification. It seems to have been introduced there in the seventh century, for ancient Gallican documents, such as the Lectionary of Luxeuil, do not mention it; Gregory of Tours also seems to ignore it. According to Mgr. Duchesne, the date seems to have been borrowed from the legend of the Finding of the Holy Cross (Lib. Pontif., I, p. cviii). Later, when the Gallican and Roman Liturgies were combined, a distinct character was given to each feast, so as to avoid sacrificing either. The 3rd of May was called the feast of the Invention of the Cross, and it commemorated in a special manner Saint Helena's discovery of the sacred wood of the Cross; the 14th of September, the feast of the Exaltation of the Cross, commemorated above all the circumstances in which Heraclius recovered from the Persians the True Cross, which they had carried off. Nevertheless, it appears from the history of the two feasts, which we have just examined, that that of the 13th and 14th of September is the older, and that the commemoration of the Finding of the Cross was at first combined with it.

The Good Friday ceremony of the Adoration of the Cross also had its origin in Jerusalem, as we have seen, and is a faithful reproduction of the rites of Adoration of the Cross of the fourth century in Jerusalem which have been described above, in accordance with the description of the author of the "Peregrinatio". This worship paid to the Cross in Jerusalem on Good Friday soon became general. Gregory of Tours speaks of the Wednesday and Friday consecrated the Cross—probably the Wednesday and Friday of Holy Week. (Cf. Greg., De Gloriâ Mart. I, v.) The most ancient adoration of the Cross in Church is described in the "Ordo Romanus" generally attributed to Saint Gregory. It is performed, according to this "Ordo", just as it is nowadays, after a series of responsory prayers. The cross is prepared before the altar; priests, deacons, subdeacons, clerics of the inferior grades, and lastly the people, each one comes in his turn; they salute the cross, during the singing of the anthem, "Ecce lignum crucis in quo salus mundi pependit. Venite, adoremus" (Behold the wood of the cross on which the salvation of the world did hang. Come, let us adore) and then Psalm 118. (See Mabillon, Mus. Ital., Paris, 1689, II, 23.) The Latin Church has kept until today the same liturgical features in the ceremony of Good Friday, added to it is the song of the Improperia and the hymn of the Cross, "Pange, lingua, gloriosi lauream certaminis".

Besides the Adoration of the Cross on Good Friday and the September feast, the Greeks have still another feast of the Adoration of the Cross on the 1st of August as well as on the third Sunday in Lent. It is probable that Gregory the Great was acquainted with this feast during his stay in Constantinople, and that the station of Santa Croce in Gerusalemme, on Lætare Sunday (the fourth Sunday in Lent), is a souvenir, or a timid effort at imitation, of the Byzantine solemnity.