Saint September 16 : St. Cyprian the Church Father who Converted from Paganism and became a Bishop and Martyr from Africa 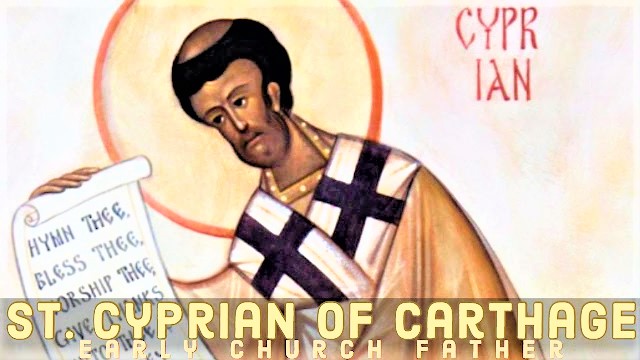 Born: 3rd century AD, North Africa
Died: September 14, 258, Carthage, Africa Province, Roman Empire
Patron of: Algeria, North Africa
CYPRIAN was an African of noble birth, but of evil life, a pagan, and a teacher of rhetoric. In middle life he was converted to Christianity, and shortly after his baptism was ordained priest, and made Bishop of Carthage, notwithstanding his resistance. When the persecution of Decius broke out, he fled from his episcopal city, that he might be the better able to minister to the wants of his flock, but returned on occasion of a pestilence. Later on he was banished, and saw in a vision his future martyrdom. Being recalled from exile, sentence of death was pronounced against him, which he received with the words "Thanks be to God." His great desire was to die whilst in the act of preaching the faith of Christ, and he had the consolation of being surrounded at his martyrdom by crowds of his faithful children. He was beheaded on the 14th of September, 258, and was buried with great solemnity. Even the pagans respected his memory.
Lives of the Saints by Alban Butler - Image Source: Google Images - Screenshot Trisagion Films
Prayer of St. Cyprian: Most gracious Father, bless with your special careall penitentiaries and homes of refuge. Look with pity on those who are housed there. Guide and protect those who have returned to the world.Grant all of them true contrition for past sins, and strengthen them in their good resolutions. Lead them along from grace to grace, so that by the help of the Holy Spirit, they may persevere in the ways of obedience and humility,and in the struggle against evil thoughts and desires.Grant the Holy Spirit to those engaged in teaching and training them,that they might have a right judgment, with respect to those entrusted to them.May they labour for love of your with deep humility and singleness of purpose, purity of heart and life, and true zeal for your glory and the salvation of souls. Give them faith and love, to sustain them in disappointment,love and patience toward those under them, and in your own good timecrown their work with an eternal recompense.Amen. (Prayer source: CatholicDoors)