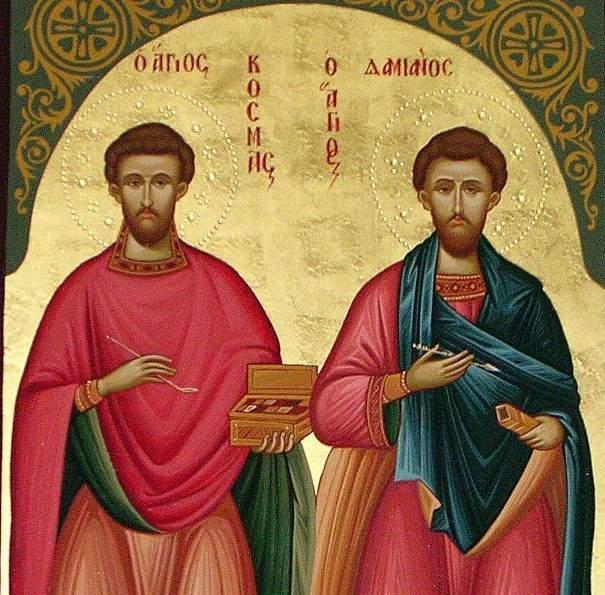 MARTYRS
Feast Day: September 26 (See video below)
Born: 3rd century AD, Arabia
Died:287 AD, Aegea, Roman province of Syria
Major Shrine:
Convent of the Poor Clares in Madrid, Basilica of Saints Cosmas and Damian in Bitonto, Bari, Italy
Patron of:
surgeons, physicians, dentists, protectors of children, barbers, pharmacists, veterinarians, orphanages, day-care centers, confectioners, children in house, against hernia, against the plague.
PRAYER TO SAINTS COSMAS AND DAMIAN
Oh glorious martyrs of Christ, Saints Cosmas and Damian, you gave your lives for the love of God, benefiting your fellow man, and crowning your martyrdom with an open and loyal profession of your faith. You taught us to love God above all things, and to love our fellow man as ourselves, professing always, and without fear, the religion of Jesus. Augmenting amongst the faithful populace many miracles, you are glorious indeed. Through your intercession, which brings about deliverance of these miracles, we pray to you for your aid in all things. May your patronage never be far from us in the illness of our body and soul. Oh great protectors, Saints Cosmas & Damian, assist us with your love and free us from all evils. Amen.
Early Christian physicians and martyrs whose feast is celebrated on 27 September. They were twins, born in Arabia, and practised the art of healing in the seaport Ægea, now Ayash (Ajass), on the Gulf of Iskanderun in Cilicia, Asia Minor, and attained a great reputation. They accepted no pay for their services and were, therefore, called anargyroi, "the silverless". In this way they brought many to the Catholic Faith. When the Diocletian persecution began, the Prefect Lysias had Cosmas and Damian arrested, and ordered them to recant. They remained constant under torture, in a miraculous manner suffered no injury from water, fire, air, nor on the cross, and were finally beheaded with the sword. Their three brothers, Anthimus, Leontius, and Euprepius died as martyrs with them. The execution took place 27 September, probably in the year 287. At a later date a number of fables grew up about them, connected in part with their relics. The remains of the martyrs were buried in the city of Cyrus in Syria; the Emperor Justinian I (527-565) sumptuously restored the city in their honour. Having been cured of a dangerous illness by the intercession of Cosmas and Damian, Justinian, in gratitude for their aid, rebuilt and adorned their church at Constantinople, and it became a celebrated place of pilgrimage. At Rome Pope Felix IV (526-530) erected a church in their honour, the mosaics of which are still among the most valuable art remains of the city. The Greek Church celebrates the feast of Saints Cosmas and Damian on 1 July, 17 October, and 1 November, and venerates three pairs of saints of the same name and profession. Cosmas and Damian are regarded as the patrons of physicians and surgeons and are sometimes represented with medical emblems. They are invoked in the Canon of the Mass and in the Litany of the Saints. Text shared from The Catholic Encyclopedia