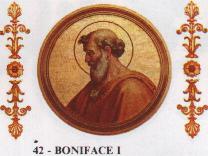 St. Boniface I
POPE
Feast: September 4
Information: Feast Day: September 4
Died: September 4, 422
Elected 28 December, 418; d. at Rome, 4 September, 422. Little is known of his life antecedent to his election. The "Liber Pontificalis" calls him a Roman, and the son of the presbyter Jocundus. He is believed to have been ordained by Pope Damasus I (366-384) and to have served as representative of Innocent I at Constantinople (c. 405).