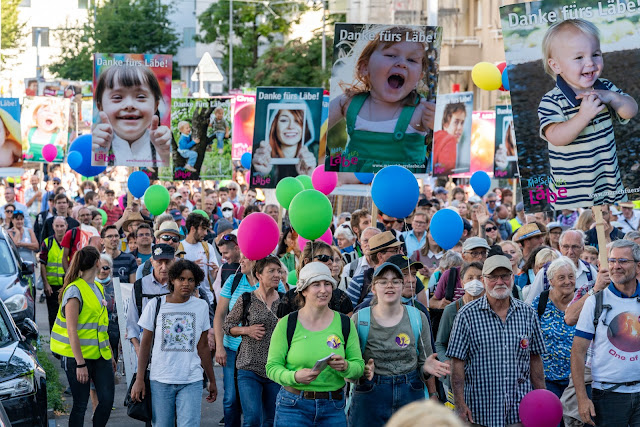 With greetings from right-to-life marches worldwide, gripping reports of experiences, a gripping political statement and church representatives, the “11. March for life”. From 2.30 p.m. around 1400 participants gathered on the market square in Oerlikon to celebrate life and draw attention to the important topic of teenage pregnancy. Those present were greeted with video messages from all over the world: Leaders of the March of Life movements from Argentina, Canada, the USA and Germany let the Swiss lifeguards know: “We are with you!” "). Messages of greeting were also sent by Bishops Charles Morerod (Freiburg) and Jean-Marie Lovey (Sion), which the Auxiliary Bishop Emeritus Marian Eleganti (Chur) read. In the morning he held a service for the "March for Life" in the Liebfrauenkirche in Zurich.
Huge pressure on young women
On this year's theme "Young, pregnant, helpless?", Joy told in a video clip how she became pregnant at the age of 15 and struggled to decide whether to keep the child. With the help of an organization, she finally found a yes to her baby, was able to be accommodated in a mother-child home and later also do an apprenticeship. The 22-year-old says of the decision she made: "It wasn't always easy, but you had life in a community, they supported me wherever they could." The young mother has never regretted her decision : “I would have my child again and again, I would choose to have it again and again. Even if it's not always easy, a child gives you so much!" Her message to young pregnant women: "Believe in yourself! It won't always be easy. You're going to need support because it's super difficult to do on your own. Accept the support, believe in yourself! Always think positive!"
Maria Grundberger, who has worked as a midwife and counselor for pregnant women for many years, also talked about how difficult it is for young mothers to keep their child. According to the specialist, the pressure on young mothers and fathers to abort the child is enormous. If the young women still decide to have their child despite the pressure, the pressure is still great afterwards, for example in relation to an apprenticeship. The experienced counselor impressively demonstrated with practical examples that the situation with children is almost impossible for teenage mothers. Expanding offers of help and offering more support, especially for young parents, is urgently needed in order to spare young women the trauma of an abortion and to save children's lives.
"The strength of the people is measured by the welfare of the weak"

In the second part of the rally, the Valais National Councilor Benjamin Roduit (CVP/Die Mitte) explained in his speech: “Marching means living. We are marching for the weakest, the most promising human being: for the child in the womb!” The politician referred to the preamble to the Federal Constitution, which states: “The strength of the people is measured by the well-being of the weak”. Thousands of the very weakest are called to grow and become great. Since the abortion rate is very high, especially among young mothers, Roduit emphasized: "You and the future young fathers need our help."
The rally ended around 5.30 p.m. with an input from Rev. Patrick Werder (Reformed Church Zurich), who emphasized: “I would also like to encourage you: Don’t believe that there is no hope! Make the right decisions! This is so important! I know a woman who said: That was the best decision of her life ever - the decision for her child. Despite the pressure, despite the hardship, despite the contradiction, despite everything. It was the right thing. The best."
The event was accompanied by music from the Bethel Worship Band. The highlight was the approximately one-hour cheerful march through the streets of Oerlikon, which the city of Zurich wanted to ban in advance, but was allowed by the governor's office. The peaceful procession took place under heavy police action, albeit with some delay due to blockades by left-wing extremists.
In the run-up to the march, several paint attacks on various supporting organizations had already taken place on Thursday and Friday night. Office buildings of the Swiss Evangelical Alliance (SEA), the Pro Life association and the Stiftung Zukunft CH were smeared and damaged. The organizations condemn the attacks and filed complaints against unknown persons. Marc Jost, Secretary General of the SEA, commented: "It is no longer a matter of course to be able to express oneself freely in Switzerland without being affected by hate and vandalism. We are concerned about this cultural change. However, we will not let this criminal minority restrict our socio-political commitment. We experience again and again
Press Release
Source: https://www.marschfuerslaebe.ch/news/news/Erfolgreicher-Marsch-fuers-Laebe-in-Zuerich