Wow from Fire Fighter at 9/11 to Monk to Catholic Priest - The Inspiring True Story of Fr. Tom Colucci 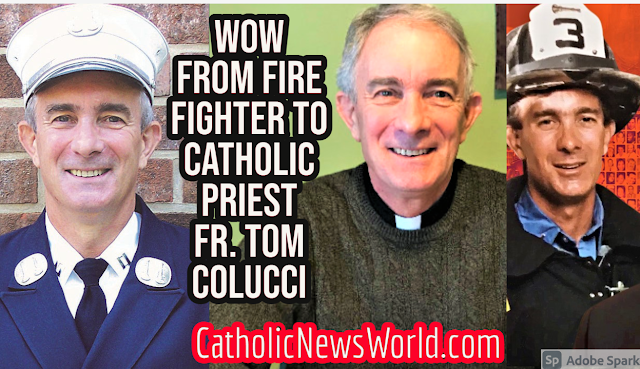 Father Thomas Colucci, at age 60, was the first firefighter of the Fire Department of New York to become a priest for the archdiocese. In addition to his 20 years of service to the city—including on 9/11, and rising to the rank of captain, he was also a Benedictine monk for nearly a decade.
Born in Bronxville and raised in Bardonia, he is the second of five children of Donald and Marilyn Colucci. He has two brothers and two sisters.
His pastor as a youth, the late Msgr. Charles Rader, founding pastor of St. Francis of Assisi parish in West Nyack, asked if he had ever considered the priesthood. “I said, ‘Father, please, I just dropped out of college. I’m not ‘priestly material.’”
The priest disagreed. “He said, ‘Tom, I think you’d be an excellent priest.’”
He returned to college, got involved in campus ministry and kept going to Mass on a regular basis. “I’ve been going to daily Mass pretty much since ’76, a miss here and there,” Colucci explained.
Colucci earned master’s and bachelor’s degrees in physical education, having attended American University in Washington, D.C., Springfield College in Springfield, Mass., and SUNY Cortland.
Colucci became a fire fighter and was at ground zero on 9/11 when the second tower collapsed. His firehouse lost five men, and he knew 100 of the 343 firefighters who died in the attacks. The weeks after were spent digging through the rubble, recovering bodies and attending funerals for the fallen first responders.
Tom planned to enter the seminary upon retirement, but then he got into an explosion on the job. Recovering from a major head injury, he decided to enter Mt. Savior Monastery near Pine City, New York.
Colucci joined the Benedictines in 2004, made final vows in 2009 and took the name Brother Thomas Bernadette, after Bernadette of Lourdes.
His daily life at the monastery included prayer seven times a week, waking up at 4 a.m., and daily chores. His chores involved cooking and manual labor, such as mowing the lawn and plowing snow, because he was the youngest monk. “My last day at the firehouse, I was 48, and was the oldest guy in the firehouse,” Colucci said. “I go up to the monastery; I’m the only guy under 70.”
He studied at St. Vincent Seminary in Latrobe, Pa., for three years, and then left the Benedictines in 2012 to pursue the diocesan priesthood.
His summer assignment for three years was at St. Margaret of Cortona, the Bronx. As a deacon, he served at Annunciation-Our Lady of Fatima parish, Crestwood.
“I’m very, very happy. The Lord’s blessed me. To accomplish this at my age, He’s given me a lot of graces. I owe it to Him. I’ve enjoyed it. It’s been a lot work, but I’ve done well and persevered. It had to be His will.”
He was ordained at St. Paul in May 2016. As the first retired New York firefighter, Colucci’s ordainment was a big event. His entire family and extended family converged on Manhattan to attend the event. About 300 firefighters were inside the church and 1,000 more were outside. Several TV stations covered his ordination, including an Italian television station.
Sources: https://www.cny.org/stories/father-thomas-colucci,14065 and
https://www.timeshudsonvalley.com/stories/911-firefighter-is-new-mpb-pastor,4347