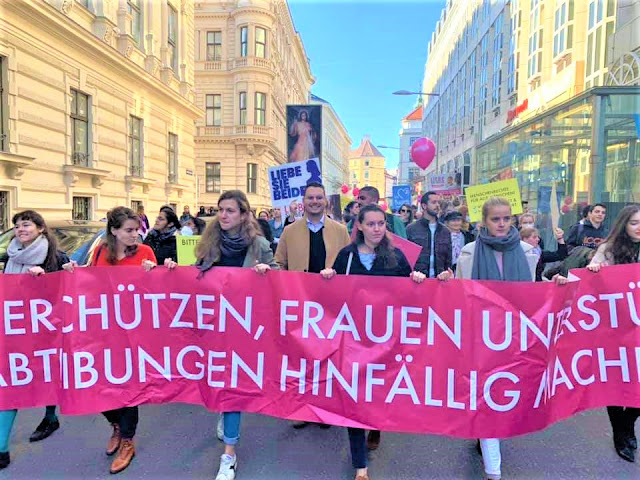 The Pro-Life Annual March for Life took place in Vienna, Austria on Saturday, October 15th, 2022. It started at 11 a.m. with a service in Vienna’s Karlskirche. The service was presided over by Bishop Klaus Küng, who is emeritus from St. Pölten. At 1.30 p.m. there was a rally on Karlsplatz, at which, among others, the General Secretary of "Youth for Life", Gabriele Huber, and Sophia Kuby from the human rights group "ADF International" will speak. The march through Vienna's city center begins at 2 p.m. The organizers and participants wanted to set an example for the right to life of the weakest members of society: for the unborn, the elderly and the sick.

The purpose of the march: "We want a culture in which every baby can be born, every pregnant woman can carry her child, in which human life is highly valued and in which even our little ones find a place in society."

The "March for Life" is a non-denominational event. Parallel to the service in the Karlskirche, a service of the Evangelical Alliance (Volksmission, Seidengasse 25, 1070 Vienna) takes place; also a catholic mass in the extraordinary rite in the Paulanerkirche (Paulanergasse 6, 1040 Vienna). According to the organizers, more than 2,500 people took part in Vienna's "March for Life" last year. This also dealt with the then upcoming new regulation of assisted suicide in Austria. There were massive disruptive attacks and insults by counter-demonstrators. (SEE Video below)

A "March for Life" with 300 participants took place last Saturday in the center of Salzburg. The starting point was the Ukrainian Greek Catholic Church of St. Mark, where an opening service took place. The Ukraine war and its consequences as well as the abortion permitted in Austria in cases of suspected disability up until the onset of labor pains were also addressed. (Info: https://marsch-fuers-leben.at )During the march through downtown Vienna that followed, there were multiple counter-protests from left-wing radicals. Hundreds of police officers, a police helicopter and a few police dogs protected the participants. An exciting situation arose at the Wiener Ring when it was blocked by the left-wing radicals. The police issued a five-minute ultimatum and threatened to use gun violence against the unreported counter-demonstration illegally blocking the march. After that the road was finally cleared. Groups like “Youth for Life”, which is getting stronger every year. The new pro-life generation grows every year.

Others traveled hundreds of kilometers, some with children, and sat in cars and buses for hours.  the next march for life will take place on October 14, 2023.

Some ÖVP politicians took part in the march, and a politician from the FPÖ is said to have been present.