Children from Uvalde, Texas who were Witness to the Attack at Robb Elementary Send Letters to Pope Francis and Receive his Blessing! 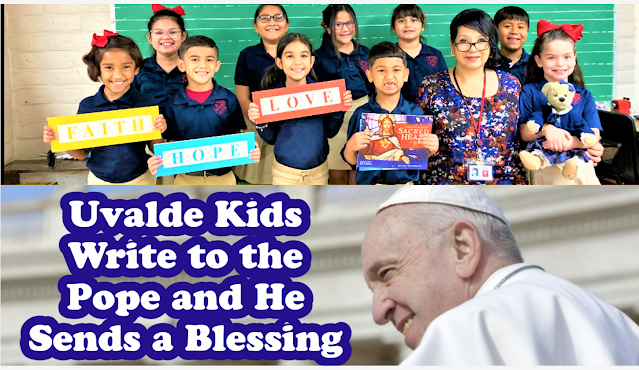 Children from Uvalde, Texas sent letters to Pope Francis. The Vatican responded to letters written by the children of Uvalde after they were personally delivered by Catholic Extension’s chancellor, Chicago Cardinal Blase Cupich, after the May 2022 shooting at Robb Elementary School that killed 19 children in the fourth grade and two teachers.
The letters were written by students at Sacred Heart Catholic School in Uvalde. It was this school that accepted many transfer from Robb Elementary via scholarships provided by Catholic Extension.
Catholic Extension also facilitated the letter-writing activity. Some of the writers of letters to the pope were students who were shot and survived, as well as students who lost family and friends during the attack on May 24. The letters display, in the children’s own words, the heartbreak and trauma they have endured — but also the hope that they still have. One letter-writer, Noah, was shot and is recovering. 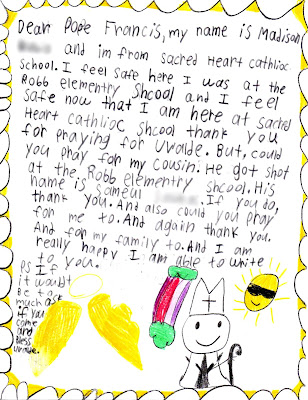 He received one of Catholic Extension’s scholarships to attend Sacred Heart and told the pope he feels “safe and loved” in his new school. 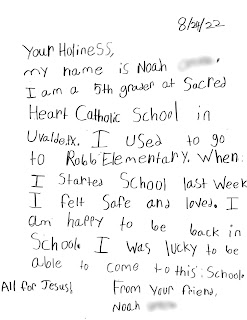 Sister Maria Luisa Aldape, STJ, Sacred Heart’s school librarian, shared the handwritten letters to Pope Francis on the children’s behalf, saying, “We have invited the children to write to you and share with you their pain and their hopes for the future. Some bear the scars on their flesh and all in their hearts.” In response, the Holy Father has pledged his prayers for these children, their families and all those harmed by the violence in Uvalde. 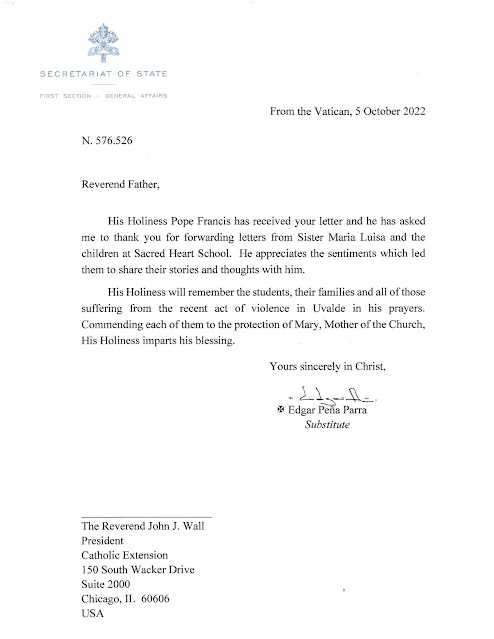 The letter from the Vatican reads, “His Holiness will remember the students, their families and all of those suffering from the recent act of violence in Uvalde.”
The Vatican letter continues, “Commending each of them to the protection of Mary, Mother of the Church, His Holiness imparts his blessing.” “We thank His Holiness for keeping the suffering children and families of Uvalde in his prayers, especially those who lost loved ones in this senseless act of violence,” said Father Jack Wall, president of Catholic Extension. “These letters written by Sacred Heart Catholic School students symbolize their pain and hopes for their future as they continue to grieve the loss of life and innocence that struck their community.”
Catholic Extension, is a US nonprofit, whose mission is to build Catholic faith communities in the poorest regions of the United States. It helped build Sacred Heart’s church and school in the early 1900s. Today, Catholic Extension has provided financial assistance for more than 30 of the Robb Elementary students, who were affected by the tragedy, to attend Sacred Heart Catholic School. Catholic Extension continues to work with Catholic leaders in Uvalde to respond to the needs of this devastated community, including ongoing mental health services, and scholarships at Sacred Heart School.
Source: https://www.catholicextension.org/stories/vatican-responds-to-letters-from-the-children-of-uvalde/ and Today's Catholic