Historical Roots of Hallowe'en, All Saints, All Souls - Did You Know the 3 Days Called Hallowtide were Also Known as the Triduum of Death? - Hallowtide Explained 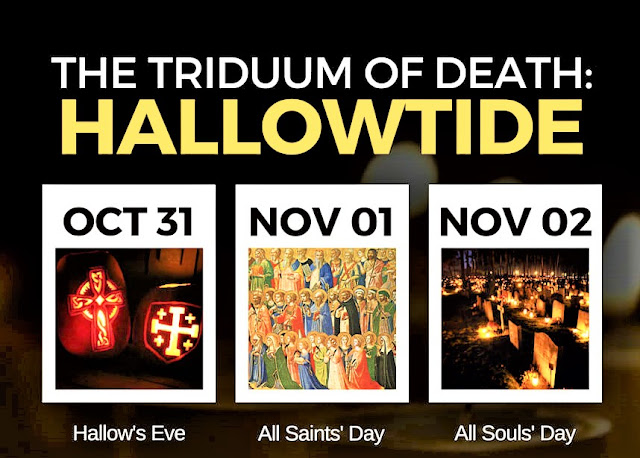 Hallowtide, also known as the Triduum of Death, were the 3 days of October 31st, November 1st, and November 2nd. Halloween's foundations are firmly rooted in Catholic tradition. Hallowe'en was celebrated as the Vespers for an important part of a short traditional and liturgical season focused on death and the last judgement, All Hallowtide.
The placement of the days reflects the Christian belief of the “Communion of Saints”.
The Communion of Saints is the union of all the faithful on Earth (the Church Militant), the saints in Heaven (Church Triumphant) and the Poor Souls in Purgatory (Church Suffering).  This period was a time to think about on the 4 last things:  Heaven, Hell, Death, and the Last Judgement of Christ.
• October 31—ALL HALLOW'S EVE
All Hallows' Eve falls on 31st October each year, and is the day before All Hallows' Day, also known as All Saints' Day in the Christian calendar. The Church traditionally held a vigil on All Hallows' Eve when worshippers would prepare themselves with prayers and fasting prior to the feast day itself.
• November 1—ALL SAINTS' DAY
All Saints' Day is a solemn holy day of the Catholic Church celebrated annually on November 1. The day is dedicated to the saints of the Church, that is, all those who have attained heaven. All Saints' Day is a Catholic Holy Day of Obligation, requiring Catholics to attend the mass.
• November 2—ALL SOULS' DAY
In Roman Catholicism, All Souls’ Day is observed on November 2 to remember all the faithful departed who are believed to be in purgatory because they died with the guilt of lesser sins on their souls. The Roman Catholic teachings say that the prayers of the faithful who are still living will help cleanse these souls in order to be pure and fit the Beatific vision.
Historical Insights: These feasts were so important that, in the mid-15th century, Pope Sixtus IV expanded the triduum into a full octave, or 8 day observance. This expanded form of Allhallowtide lasted for centuries until 1955, when it was eliminated by Pope Pius XII as a part of a greater (pre-Vatican II) liturgical reform. This is why Allhallowtide is not normally celebrated even by traditional Catholics, since the Extraordinary Form of the Mass follows the 1962 Roman Missal.
Sources:
The Triduum of Death: The Forgotten Season of Allhallowtide—ChurchPop;
The Catholic roots of Halloween, the Vigil of All Saints' Day—Vatican News;
The forgotten triduum of Allhallowtide—The Irish Catholic ;
All Hallow's Eve—Catholic Education Resource center;
All Saints' Day—Catholic Online ; The Irish Catholic
All Saints' Day All Souls' Day Halloween Hallowtide