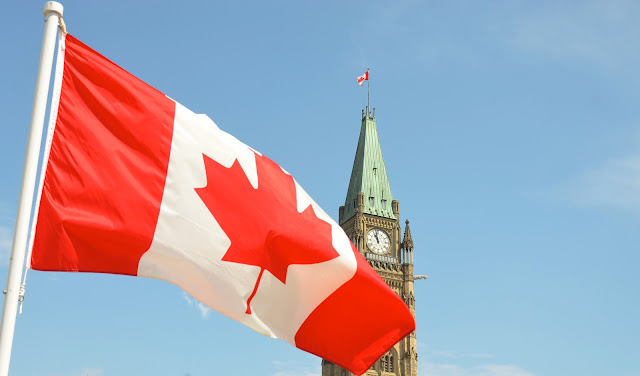 The government of Canada recently released its 2021 census. The latest statistics, reveal that the number of Catholics in Canada is now 10.9 million. This is a decline of 2 million from the last census in 2011, but Catholics are still in the majority among the country's Christian denominations. Canada has a total population of 38.25 million people.

Approximately 12.6 million people, or more than one-third of Canada's population, reported having no religious affiliation. The proportion of this population has more than doubled in 20 years, going from 16.5% in 2001 to 34.6% in 2021.

According to studies by the Pew Research Center and studies based on other data sources (e.g., World Values Survey), a similar trend is observed in other predominantly Christian countries (United States, Australia and several European countries), namely a decline in Christianity and an increase in other religions and the number of people with no religious affiliation.

Another long-standing and ongoing need for diversity data is on religious affiliation. This information has been collected every 10 years since 1871. 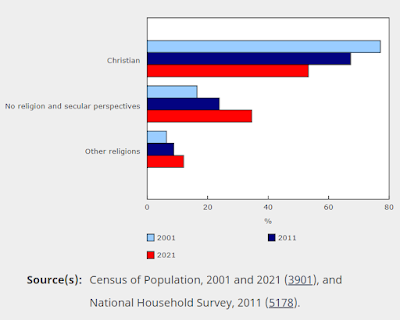 The majority of the population is Christian, but their share is decreasing

In 2021, just under 2.8 million people, or 7.6% of the population, reported being Christian without further indication of a specific denomination, double the figure from 2011 (1.4 million).

With the exception of Orthodox Christians and people who simply reported being Christian, the proportion of affiliation in every Christian denomination decreased from 2011 to 2021.

More than one in three Canadians reported having no religious affiliation

Approximately 12.6 million people, or more than one-third of Canada's population, reported having no religious affiliation or having a secular perspective (atheist, agnostic, humanist and other secular perspectives). The proportion of this population has more than doubled in 20 years, rising from 16.5% in 2001 to 23.9% in 2011 and to 34.6% in 2021.

The importance of Christian denominations varies greatly from region to region

The religious portrait varies greatly from one province and territory to another. With the exception of Nunavut, Catholicism is the religious affiliation reported most often in all provinces and territories, representing 29.9% of Canada's population.

People affiliated with the United Church represent larger shares of the population in the Atlantic provinces, namely Newfoundland and Labrador (12.1%), Prince Edward Island (9.7%), Nova Scotia (7.5%), as well as in Saskatchewan (7.4%). In contrast, this Christian denomination represents 3.3% of Canada's population as a whole.

There were higher shares of people who reported the Anglican religion in Nunavut (39.1%) and Newfoundland and Labrador (21.5%), compared with 3.1% for Canada as a whole.

In Ontario, 16.3% of the population reported being affiliated with a non-Christian religion, the highest proportion in Canada. In particular, Ontario posted the highest percentage of Muslims (6.7%) and Hindus (4.1%).

British Columbia ranked second among provinces and territories, with a large non-Christian population (13.7%). More specifically, it had the highest proportion of people affiliated with a Sikh religion (5.9%).