Pope Francis says "I invite you to accompany me in the prophecy for peace - Christ, the Lord of peace!" to Communion and Liberation - FULL TEXT + Video 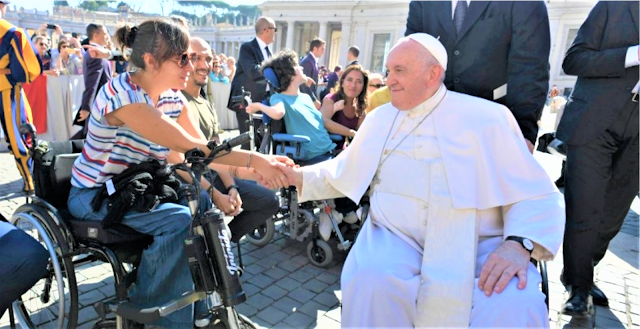 ADDRESS OF THE HOLY FATHER FRANCIS
TO MEMBERS OF COMMUNION AND LIBERATION
St. Peter's Square
Saturday, October 15, 2022
___________________________________
Dear brothers and sisters, good morning and welcome!
You have come in many, from Italy and from various countries. Your movement does not lose its ability to rally and mobilize. I thank you for having wished to show your communion with the Apostolic See and your affection for the Pope. I thank the President of the Fraternity, prof. Davide Prosperi, as well as Hassina and Rose, who shared their experiences. I greet the Cardinal Prefect, Cardinal Farrell and the Cardinals and Bishops present.

We are gathered to commemorate the centenary of the birth of Mons. Luigi Giussani. And we do it with gratitude in the soul, as we have heard from Rose and Hassina. I express my personal gratitude for the good he has done me, as a priest, to meditate on some books by Fr Giussani - as a young priest -; and I also do it as universal Pastor for all that he has been able to sow and radiate everywhere for the good of the Church. And how could those who were his friends, his children and his disciples fail to remember him with moving gratitude? Thanks to his priestly paternity passionate in communicating Christ, they have grown in faith as a gift that gives meaning, human breadth and hope to life. Fr Giussani was a father and teacher, he was a servant of all the anxieties and human situations that he was encountering in his educational and missionary passion. The Church recognizes his pedagogical and theological genius, deployed from a charism that was given to him by the Holy Spirit for "common utility". It is not mere nostalgia that leads us to celebrate this centenary, but it is the grateful memory of his presence: not only in our biographies and in our hearts, but in the communion of saints, from where he intercedes for all of him.
I know, dear friends, brothers and sisters, that transition periods are not easy at all, when the founding father is no longer physically present. Many Catholic foundations have experienced this throughout history. We must thank Father Julian Carrón for his service in leading the movement during this period and for having kept the helm of communion with the pontificate firm. However, there was no lack of serious problems, divisions, and certainly also an impoverishment in the presence of an ecclesial movement as important as Communion and Liberation, from which the Church, and myself, hopes for more, much more. Times of crisis are times of recapitulation of your extraordinary history of charity, culture and mission; they are times of critical discernment of what has limited the fruitful potential of Fr Giussani's charism; they are times of missionary renewal and relaunch in the light of the current ecclesial moment, as well as of the needs, sufferings and hopes of contemporary humanity. The crisis makes us grow. It should not be reduced to conflict, which cancels. The crisis makes us grow.
Certainly Fr Giussani is praying for unity in all the articulations of your movement; safe. You know well that unity does not mean uniformity. Do not be afraid of the different sensitivities and confrontation in the path of the movement. It cannot be otherwise in a movement in which all the adherents are called to live personally and share the charism received co-responsibly. Everyone lives it originally and also in community. Yes, this is important: that unity is stronger than the dispersive forces or the dragging on of old oppositions. A unity with those and those who lead the movement, unity with the Pastors, unity in carefully following the indications of the Dicastery for the Laity, Family and Life, and unity with the Pope, who is the servant of communion in truth and in charity.
Do not waste your precious time in chatter, diffidence and opposition. Please! Don't waste your time!
Now I would like to recall some aspects of Fr Giussani's rich personality: his charisma, his vocation as an educator, his love for the Church.
1. Fr Giussani, a charismatic man. He was certainly a man of great personal charisma, capable of attracting thousands of young people and touching their hearts. We can ask ourselves: where did his charisma come from? He came from something he had experienced firsthand: as a boy, only fifteen, he had been struck by the discovery of the mystery of Christ. He had intuited - not only with his mind but with his heart - that Christ is the unifying center of all reality, he is the answer to all human questions, he is the fulfillment of every desire for happiness, for good, for love, for eternity. present in the human heart. The amazement and fascination of this first encounter with Christ have never abandoned him. As the then Cardinal Ratzinger said at his funeral: "Fr Giussani always kept the gaze of his life and his heart fixed on Christ. In this way he understood that Christianity is not an intellectual system, a package of dogmas, a moralism, but that Christianity is an encounter; a love story; it is an event ». Here lies the root of his charisma. Fr Giussani attracted, convinced, converted hearts because he passed on to others what he carried within him after that fundamental experience of him: the passion for man and the passion for Christ as the fulfillment of man. Many young people followed him because young people have a great flair. What he said came from his experience and from his heart, therefore it inspired trust, sympathy and interest.