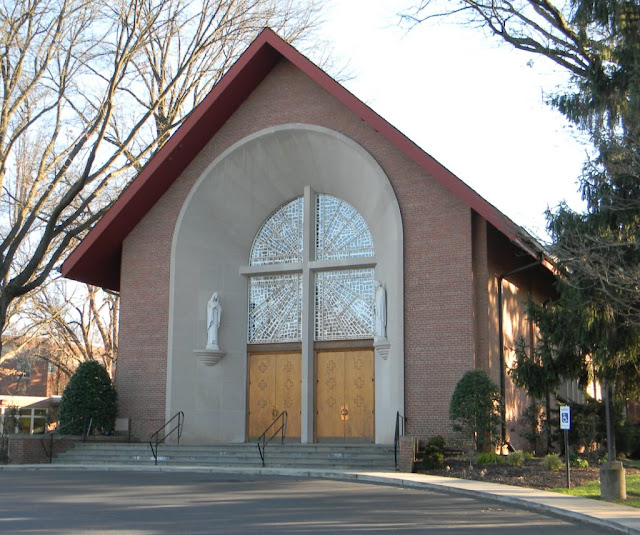 CS Report - The pastor of Holy Cross Parish in Garrett Park, Maryland, USA has been suspended from his duties following allegations of sexual abuse that reportedly occurred outside The Roman Catholic Archdiocese of Washington prior to the priest’s ordination 31 years ago.
Father Robert P. Buchmeier, who has served as pastor of Holy Cross Parish since 2015, was removed from there following the allegation of abuse that was alleged to have occurred in Northern Virginia.
“Upon receiving this allegation, in compliance with our Child Protection and Safe Environment Policy, Father Buchmeier on Friday (Sept. 30) was placed on administrative leave, his priestly faculties were suspended, and he is no longer on archdiocesan property,” Washington Cardinal Wilton Gregory said in an Oct. 4 letter to priests of this archdiocese. “These actions have been taken pursuant to our policy and in no way reflect a premature judgment of Father Buchmeier’s guilt or innocence, pending a full investigation by civil authorities.”
An investigation is being conducted by the Alexandria Police Department, and as of Oct. 4, 2022, no charges have been filed against the priest.
In a Sept. 30 letter to Holy Cross parishioners that was posted on the parish website, Father Anthony Lickteig, the Episcopal Vicar for Clergy and Secretary for Ministerial Leadership, noted that “this allegation was reported to the Catholic Diocese of Arlington, which notified the appropriate civil authorities and also notified us, The Roman Catholic Archdiocese of Washington.”
Father Lickteig wrote that “Father Buchmeier’s priestly faculties have been suspended, and he is no longer at the rectory, pending a review of the allegations.”
The Roman Catholic Archdiocese of Washington, in a prepared statement, noted that after it learned of the allegation, “we have turned the matter over to law enforcement to investigate.”
“Our focus is on meeting the needs of our community, and we will be communicating further with the Holy Cross Catholic parish and school this week,” the statement said. “When more information about the law enforcement investigation becomes available, we will be able to respond further.”
Father Buchmeier, a native of Spokane, Washington, entered the St. John XXIII National Seminary in Massachusetts in 1987 after serving 15 years as an officer in the U.S. Army’s Medical Service Corps. He was ordained a priest for The Roman Catholic Archdiocese of Washington in 1991.
Father Lickteig said archdiocesan and parish officials “will fully cooperate with the investigation by the civil authorities and comply with the Child Protection and Safe Environment Policy of The Roman Catholic Archdiocese of Washington.”
The Archdiocese of Washington has had a Child Protection Policy that has been in effect for more than 35 years. When the Archdiocese of Washington instituted the policy in 1986, it was one of the first dioceses in the United States to do so.
It requires a thorough background check for all employees, clergy and volunteers who have substantial contact with children. The policy requires two forms of background checks – electronic background checks and fingerprinting.
The Archdiocese of Washington also makes resources and information about protecting children available online at https://adw.org/about-us/policies-and-resources/child-protection. There, parents will find information on the archdiocese’s child protection efforts, safety tips, how to recognize Internet and cyber bullying and other information.
In addition to that policy, the archdiocese has an independent Child Protection Advisory Board comprised of lay experts and a clergy member that advises on and monitors compliance with child protection efforts. The Child Protection Advisory Board ensures policies are properly looked at, reviewed and implemented and prepares an audit report that is published annually in the Catholic Standard.
“It deeply saddens us to have to share some difficult information, however, we believe it is important to make the community aware of a matter involving child protection concerns,” Father Lickteig wrote in his letter to Holy Cross parishioners. “Holy Cross Church and The Roman Catholic Archdiocese of Washington take seriously our responsibility to protect children entrusted to our care. It is important that you be informed of the facts given the gravity of this matter and our deep commitment to the safety of our youth and the healing of those who have been harmed by abuse.”
The archdiocese’s Child Protection Policy also mandates immediate reporting of abuse allegations to civil authorities.
“If at any time you become aware of improper conduct by anyone in archdiocesan ministry, please contact Courtney Chase, Executive Director of the Archdiocese’s Office of Child Protection & Safe Environment, at 301-853-5302,” Father Lickteig wrote. “We encourage anyone with information (concerning Father Buchmeier) that may be helpful to the authorities to contact the Alexandria Police Department, Criminal Investigations Division, at 703-746-4444.”
Cardinal Gregory, in his letter to priests, wrote, “Please join me in praying for the Holy Cross Parish community, for the alleged victims, and for Father Buchmeier during this difficult time.”
Edited from the Catholic Standard