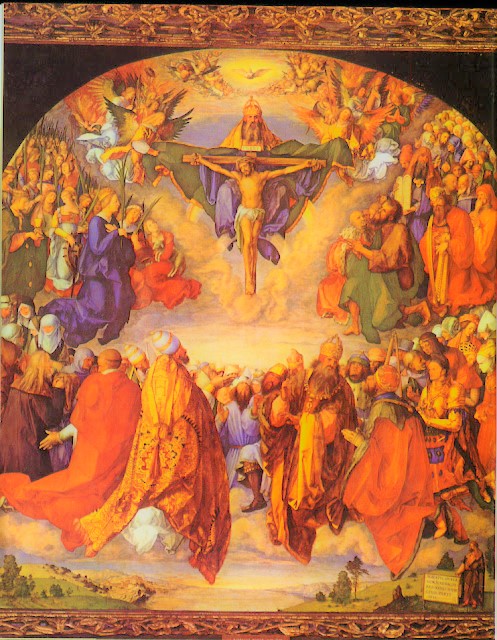 All Saints Day is a Solemnity, or major feast day, celebrated on the first of November.
It was instituted to honour all the saints, known and unknown, and, according to Pope Urban the fourth, to supply any deficiencies in the faithful's celebration of saints' feasts during the year. In the early days the Christians were accustomed to solemnize the anniversary of a martyr's death for Christ at the place of martyrdom. In the fourth century, neighbouring dioceses began to interchange feasts, to transfer relics, to divide them, and to join in a common feast.

In the persecution of Diocletian the number of martyrs became so great that a separate day could not be assigned to each. But the Church, feeling that every martyr should be honored, appointed a common day for all.
The first trace of this we find in Antioch on the Sunday after Pentecost. We also find mention of a common day in a sermon of Saint Ephrem the Syrian (373 AD. ), and by Saint John Chrysostom (407 AD. ). The vigil seems to have been held as early as the feast itself. The Catechism says, The intercession of the saints. “Being more closely united to Christ, those who dwell in heaven fix the whole Church more firmly in holiness. . . . They do not cease to intercede with the Father for us, as they proffer the merits which they acquired on earth through the one mediator between God and men, Christ Jesus. . . . So by their fraternal concern is our weakness greatly helped. ”
We cherish the memory of the saints in order: to be more closely united with Christ, and to have an example for our Christian life.
In the Bible, the New Testatment uses the word saint or saints sixty times. Saint Paul often refers to saints; in Colossians chapter one he says; ". . . and giving joyful thanks to the Father, who has qualified you to share in the inheritance of his saints in the kingdom of light. " The current date of November 1st was instituted by Pope Gregory the third (731-741 AD. ), when he consecrated a chapel to all the martyrs in St. Peter's Basilica in Rome and ordered an annual celebration. This celebration was originally confined to the diocese of Rome, but Pope Gregory the fourth (827-844 AD. ) extended the feast to the entire Church and ordered it to be celebrated on November 1st.
How to honor the Saints All Year;
1. Keep track of feast days of favorite saints.
2. Keep track of the feast days of the namesake (or patron) saints of family members.
3. Read about the saint of the day each day.
4. watch a movie about a saint.
All Saints Day Feast Days Saints