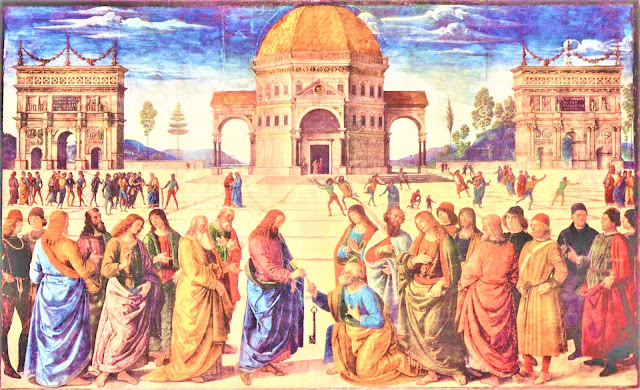 Vatican to host 'Lectio Petri' events to explore St. Peter's. The Holy See Press Office announced with Cardinals Ravasi and Gambetti the 'Lectio Petris: The Apostle Peter in History, Arts and Culture' initiative, which runs through the Spring of 2023. The Vatican is set to host 'Lectio Petri: The Apostle Peter in History, Arts and Culture,' a series of meetings on the life and ministry of the saint, open to the public in St. Peter's Basilica.
According to Vatican News in a report by Deborah Castellano Lubov, this new project was presented on Thursday in the Holy See Press Office by Cardinal Gianfranco Ravasi, President Emeritus of the former Pontifical Council for Culture and founder of the Courtyard of the Gentiles, and Cardinal Mauro Gambetti, Vicar General for His Holiness for Vatican City, Archpriest of St. Peter's Basilica, and President of the Fabric of Saint Peter. The series consists of four encounters, in the evocative setting of the Vatican Basilica and with an unprecedented and original format, to explore the life and Ministry of the Apostle Peter in history, arts and culture. The project is being organized by the Basilica, the Fratelli tutti Foundation and the Courtyard of the Gentiles.
During Thursday's Press Conference, Cardinal Ravasi emphasized the current revelance of Saint Peter. “Peter is a fascinating and complex figure, also narrated in the Gospels, with his weaknesses and frailties. His story is studded with different moments, we could almost call them 'phases', the same that a believer might go through today: vocation, crisis - resulting in betrayal - and then conversion and final rehabilitation.” "We look at the first of the Apostles with gratitude and reverence," he reflected, "for crossing the Mediterranean and arriving in Rome, in the city that the poet Tibullus called 'eternal,' and bearing witness to his love for Jesus." "Peter," continued the President of the Fabric of St. Peter, "followed the Master, becoming like Him in every way." This inheritance, he suggested, "is seamlessly duplicated by the Apostolic Tradition to this day." “In the light of Peter's faith, we want to enlighten the face of 'our' Church and better understand the Way that the Magisterium points out to all peoples in this Third Millennium", from the Second Vatican Council to Pope Francis.”
Four encounters The first appointment will be hosted by Cardinal Gianfranco Ravasi, on Tuesday, 25 October, at 6:30 p.m. Rome time, in the Basilica. For the meeting entitled, "The life of St. Peter. The following, the tears and the martyrdom,' Cardinal Ravasi will propose a reflection and some comments on some of the most significant Gospel passages concerning the Apostle and his vocation. The chosen readings will be interpreted by Alba Rohrwacher, a well-known and internationally acclaimed actress. The readings include Matthew 4:18-22 and Matthew 16:13-19 on the primacy of Peter, as well as Matthew 26:69- 75 on the denial, and John’s 21:1-19 on Jesus' appearance on the shore of the Sea of Galilee.
The event will be enriched also by the introduction and conclusions of Cardinal Gambetti, and by a string quartet performing: Mozart’s Ave Verum Corpus, Handel’s Cantate Domino, and Marcello’s Adagio from the Concert in C minor for Oboe and Strings.
On Tuesday, 22 November, a Catholic, a Protestant and an Orthodox theologian will debate together on the theme of the Primacy of Peter, at an event entitled "On this rock, I will build my Church”. The third appointment, called "Accounting for the Hope that is in us", is scheduled for Tuesday, 17 January 2023, and dedicated to an in-depth analysis of the figure of the Saint in history and culture. Cardinal Ravasi will comment on the two Letters of Peter and some passages from Pliny's Letter, one of the oldest sources describing the life of the early Christians. Professor Giuliano Amato, President of the Courtyard of the Gentiles Foundation, will conclude the meeting with a reflection on the relationship between faith and society. Finally, the last Lectio Petri event, "Quo vadis," is scheduled for 7 March. With the participation with prominent personalities from the world of culture, it will analyse the figure of Peter in arts, literature and music. The Courtyard of the Gentiles is a structure of the Dicastery for Culture and Education, founded by Cardinal Gianfranco Ravasi to promote dialogue between believers and non-believers.
Edited from Vatican News