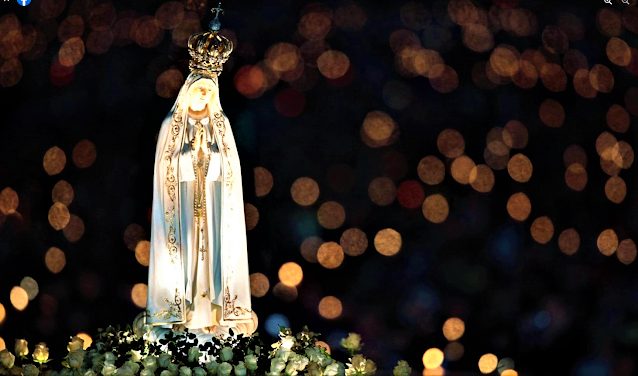 "Germany thanks Maria and prays for peace" Berlin. On October 12th on the vigil of the 105th anniversary of the miracle of the sun at Fatima, around 4,000 devout Catholics from all over Germany marched in a solemn procession, singing and praying to the national landmark, the Brandenburg Gate.
There they listened to the speech given by St. John Paul II held at this very spot during his visit to Germany in 1996, presented by the well-known publicist Martin Lohmann. “Man is called to freedom – and he finds this freedom in Christ” was the central sentence of this epochal manifesto for a Christian Europe. For him, the Brandenburg Gate was the strongest symbol of human freedom in a united Europe that was no longer divided.
Then acolytes and priests carried the "German National Madonna", one of Pope Paul VI. Pilgrim statue donated to the German people in 1967, on the way through the gate, which the Polish Pope and Federal Chancellor Dr. Helmut Kohl had left. Because John Paul II was also convinced that the fall of the Wall in 1989 and the reunification of Germany a year later, at the same time as the fall of the communist dictatorships throughout Eastern Europe, was a miracle, performed by the same Blessed Mother who appeared to three children of visionaries in 1917 in Fatima, Portugal.
“We took the gift of peace for granted. Instead of thanking Our Lady, we lived as if God didn't exist. No wonder, then, that the period of peace ended after 33 years,” explained the German historian and author Michael Hesemann (“The Last Secret of Fatima”), the initiator of the Berlin Fatima procession. 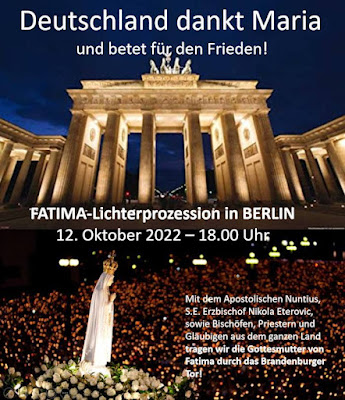 In the Fatima jubilee year 2017, which was largely ignored by the church in Germany, he had the idea: "If Germany doesn't make a pilgrimage to Fatima, we just have to bring Fatima to Germany. Right in the heart, in the 'godless Berlin', to the gate that the Blessed Mother opened!”
The Fatima activist Bruno Lück founded the association “Germany thanks Maria”, which organized the major Berlin event, together with the Altötting initiative “Germany prays the rosary” by Manfred Benkert, which has been taking place every Wednesday at 800 locations across the country for a year Prayer meeting held with up to 20,000 believers.
On October 12th, at the same time as the Berlin procession, rosary prayers and candlelight processions took place throughout Germany, in which not only thanks were given to the Blessed Mother, but prayers were also made for peace in the Ukraine and throughout Europe. In turn, delegations from many German Marian shrines and places of prayer came to Berlin.
From the beginning, the most prominent supporter of the campaign was the Pope's representative in Germany, the Apostolic Nuncio Nikola Eterovic. He immediately agreed to celebrate a pontifical mass for the participants in the procession. He also spoke the consecration formula with which Pope Francis entrusted Russia and Ukraine to the Immaculate Heart of Mary on March 25, 2022 in view of the Ukraine war.
The procession moved through Berlin in the evening, past the Holocaust Memorial (where the 6 million murdered Jews were commemorated) to the Brandenburg Gate. Its next stop was the Soviet War Memorial, where the consecration of Russia and the world to the Immaculate Heart of Mary, given by Pope Pius XII, was pronounced. completed on October 31, 1942. Back then, exactly 80 years ago, Hitler's troops appeared invincible and invaded country after country.
The procession in front of the “Angel of Peace”, as the Berlin Victory Column is popularly known, ended with the consecration prayer of John Paul II in 1984, which he believed led to the end of the Cold War. “The message of Fatima teaches that man is a co-creator of his future. Forgetting God leads to crises, wars and catastrophes, prayer and conversion to peace,” Hesemann is said, quoting the Polish Pope here as well. "It was time to make a sign of repentance and to pray for the peace that now suddenly seems so threatened." The great success of the campaign and the many positive reactions encourage the organizers of "Germany thanks Maria" to think about the future. Now it is being examined whether the Berlin Fatima procession should not be repeated every year in October.
Source: Kath.net