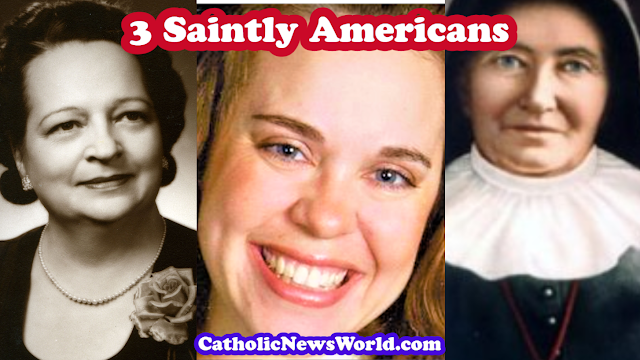 These three American women are those whose causes for canonization are being presented during the US Catholic Bishops Fall assembly. The bishops will vote on whether to advance the causes of Cora Evans, Michelle Duppong and Mother Margaret Mary Healy Murphy.

UPDATE: The US Bishops Affirmed the Advancement of the Causes of Beatification and Canonization of the 3 women.

Cora Evans, a wife, a mother, and possible mystic, was baptized Catholic in Utah in 1935 after becoming disillusioned with the Mormon faith. Born in 1904, she moved to California with her family in 1941. She died at age 74 in Boulder Creek, California, March 30, 1957.

Promoters of her sainthood cause in the Diocese of Monterey, California, have said she reported multiple visions of Jesus and the saints and received a mission from Jesus to promote the “mystical humanity of Christ,” the idea that Christ is always with people and people should behave always as Christ would.

The Diocese of Bismarck, North Dakota, in June opened an investigation into “the holiness of life and love of God” of Duppong, who died of cancer Dec. 25, 2015. She was 31.

When she died, Duppong was the director of adult faith formation for the diocese. Before that, she was a missionary for six years with the Fellowship of Catholic University Students, or FOCUS. In her position, the diocese said, she used “her missionary zeal to bring others closer to Christ.”

She was recently declared a "Servant of God" by the Church.

Mother Murphy in 1893 founded the Sisters of the Holy Spirit and Mary Immaculate, the first order of women religious in the state of Texas. The congregation was started after Mother Murphy, a native of Ireland, spent years helping the poor and serving African Americans and Mexican Americans as a laywoman. She died in 1907 at age 74.