#BreakingNews a Catholic Priest has been Kidnapped by Terrorists - Please Pray for Fr. Abraham Kunat 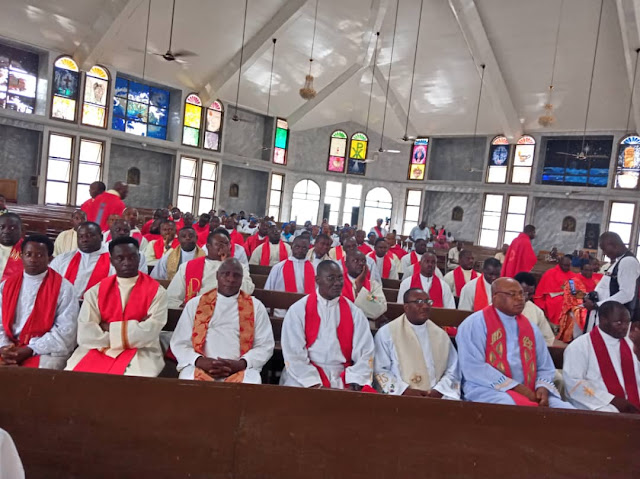 Fr. Abraham Kunat, age 57, has been kidnapped by armed men in the local government area of Kachia, in the state of Kaduna, in northern Nigeria. The kidnapping took place around midnight yesterday, November 8, in St Mulumba, Kurmin Sara.
The Chancellor, of the Archdiocese of Kaduna, Rev. Fr. Christian Emmanuel, in a statement made available to journalists, said, “I write to inform you of the abduction of one of our priests, Rev. Fr. Abraham Kunat, the Parish Priest of St Bernard, Idon Gida, on Tuesday, November 8, 2022, at about 12:30 am on Tuesday.

See  Video Below:
“The incident took place at St Mulumba, Kurmin Sara, Kachia LGA, where Fr Kunat had been residing all along due to the insecurity situation. “We solicit for the prayerful support of the faithful and indeed all men and women of goodwill that God Almighty will take control of the situation. preserve our priest, and bring him back to us in peace.” He said, “It is a sad situation because he is the priest of Idom but was picked at his village Kurmin Sara in Kachia LGA. It’s a very sad situation because many things are happening in the state unreported. “A lot needs to be done to secure the residents from criminal elements terrorising the people across the state.” As of the time of filing this report, neither the state government nor the state police command had confirmed the attack.
Agenzia Fides reports that in confirmation of the words of Reverend Joseph Hayeb, still in the state of Kaduna, an armed group has attacked the so-called “Oil Village”, located near the Kaduna refinery. The armed group of about 15 armed men attacked the village on the night of November 7, looking for houses to loot. In escaping, they took nine people hostage. One of them later managed to escape from the hands of the kidnappers. The Oil Village is a frequent target of raids by bandits, to the point that residents, workers employed at the local refinery from all over Nigeria, have long demanded a permanent military post in the village to protect them from further assaults.
Vatican News explains that this latest abduction of Fr. Kunat in one in a series of kidnappings of members of the clergy or religious in Africa’s most populous country.
The last such reported abduction of a priest was on 16 October, when the Archdiocese of Onitsha requested prayers for the safe and unconditional release of Fr. Joseph Igweagu who was kidnapped on 12 October as he was returning to his parish residence after celebrating a Funeral Vigil Mass in Umunachi, Anambra State.
(Diocese Kaduna and Agenzia Fides, Image Priests from the Diocese of Kaduna)
Kidnapped Nigeria Priests