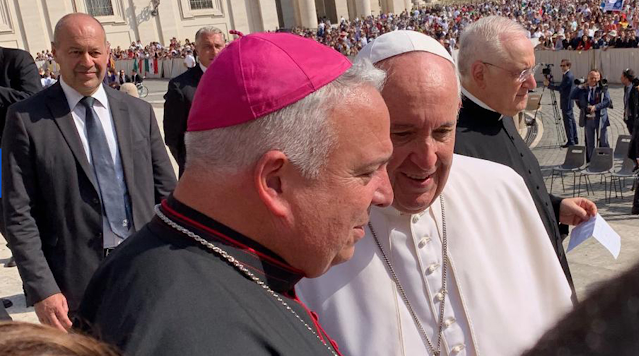 BALTIMORE, MARYLAND, Nov. 22, 2022
CRS Release – Most Reverend Nelson J. Pérez, Archbishop of Philadelphia, has been named chairman of the Catholic Relief Services (CRS) board of directors by Archbishop Timothy Broglio, the newly elected President of the U.S. Conference of Catholic Bishops (USCCB). Archbishop Pérez will succeed Bishop Frank J. Caggiano of the Diocese of Bridgeport, CT, who has served as CRS board chair since November 2019.
“I was deeply honored to learn that Archbishop Broglio had appointed me Chair of the Board of CRS,” Archbishop Pérez said. “For more than 75 years, CRS has been a beacon of hope for poor and vulnerable families around the world. Its humanitarian aid initiatives are often the difference between life and death for those facing poverty, famine, war and epidemics.”
Archbishop Pérez’s term will begin immediately and run through November 2025.
“We are thrilled to welcome Archbishop Pérez as the chairman of our board of directors,” Sean Callahan, president and CEO of CRS said. “I look forward to working with him as we address some of the most pressing issues CRS has faced, including the global food crisis and the impact of climate change on people living in poverty.”
Archbishop Pérez was ordained a priest for the Archdiocese of Philadelphia in 1989. He served for many years at the parish level with a keen focus on ministry to Hispanic Catholics before being named an Auxiliary Bishop for the Diocese of Rockville Centre in 2012. Pope Francis named him Bishop of the Diocese of Cleveland in 2017 and Archbishop of Philadelphia in 2020.
Archbishop Pérez and Callahan also expressed their gratitude to Bishop Caggiano for his leadership during the last three years.
“Bishop Caggiano joined our board as chair just a few months before the COVID-19 pandemic changed all of our lives so dramatically,” Callahan said. “His unwavering support and guidance helped us navigate those challenges so that we could continue to offer services to people who needed them.”
Archbishop Pérez said, “His work to promote and defend human life while fostering a more just and peaceful world is truly commendable. I look forward to building on his efforts.”
Bishop Caggiano said Archbishop Pérez will bring a message of hope, engagement and optimism to his role as chairman of CRS.
“Archbishop Nelson Pérez is a man of deep conviction about the need to protect the dignity of all of our brothers and sisters, particularly the most vulnerable among us,” Bishop Caggiano said. “On a personal note, I am immensely grateful for having had the opportunity to serve as CRS board chairman over the past three years, and for all the staff who provided me with their invaluable expertise and commitment. It has been both humbling and profoundly life-changing to walk with those who are hungry, homeless and at risk around the globe, and to see how CRS programs can change lives and bring hope, while uniting us together in faith.”
In addition to the appointment of a new board chair, CRS welcomes three Episcopal board members elected during the USCCB annual meeting in Baltimore last week. Archbishop Gregory J. Hartmayer, OFM Conv., of the Archdiocese of Atlanta was elected to serve a first term while Bishop Mark J. Seitz of El Paso and Bishop Anthony B. Taylor of Little Rock were each elected to serve a second term on the board.
Beginning on January 1, 2023, Mr. Matthew M. McKenna will begin his term as a member of the CRS board of directors. McKenna is currently at Georgetown University's McDonough School of Business, where he founded an initiative to study the role of the private sector investment in rural economic development. He currently lives in Bronxville, NY with his wife Nancy, where they raised their four children.
We are also thankful to Archbishop Broglio and Stephen Walsh for their service on the CRS Board. Archbishop Broglio has played a critical leadership role as the Chair of our Overseas Operations Committee and Stephen Walsh, who served for six years, has been a strong advocate for innovative financing and supporting sustainable responses for local communities.
“Our board members are an integral part of our mission to uphold the dignity of our sisters and brothers,” Callahan said. “We know that with their support we will continue to alleviate poverty and suffering around the world.”
###
Press Release: Catholic Relief Services is the official international humanitarian agency of the Catholic community in the United States. The agency alleviates suffering and provides assistance to people in need in more than 100 countries, without regard to race, religion or nationality. CRS’ relief and development work is accomplished through programs of emergency response, HIV, health, agriculture, education, microfinance and peacebuilding. For more information, visit www.crs.org or www.crsespanol.org and follow Catholic