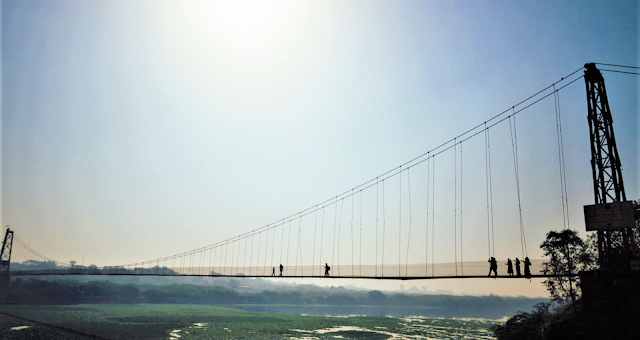 A bridge in India had been closed for maintenance work and was reopened when it collapsed killing 141 people. The Catholic Church is in the front line in providing aid. The local archbishop, Msgr. Thomas Macwan: "Even in this tragedy we will be witnesses of God's love through our apostolate of service".
AsiaNews reports that at least 141 people were killed when a pedestrian suspension bridge over the Machchu River collapsed last night in the city of Morbi, western Gujarat State. The bridge had been reopened a few days ago after being repaired. Meanwhile, search operations continue for those missing in the river. Rescuers have so far rescued 177 people.
Fr. Johnson Kadaparambil, pastor of St Mary's Church in Morbi, told AsiaNews: "The bridge is about three kilometres from our church. The parish is carrying out a preliminary investigation, identifying the people involved in the tragedy, although it is very difficult to reach the spot where the accident occurred, but we are helping the families of the victims'. According to reports, several people were marching on the bridge for the Hindu festivities of Diwali and Chhath Puja. The bridge, which is over a century old, is a well-known tourist attraction in India and had been closed in March this year for maintenance work, but had apparently not yet received a certificate of fitness from the municipality when it was reopened on 26 October.
"I am deeply saddened by the tragic loss of life in this disaster, so many people have lost their lives, families have lost their loved ones, everyone has lost a son, a daughter, a mother or a father. There is so much suffering, it is a terrible accident. It should never have happened,' said Msgr Thomas Macwan, Archbishop of Gandhinagar. "I offer my deepest condolences to the families of the deceased and injured, and pray that God's consolation will strengthen them in their grief." The Church in Gujarat has always intervened in relief operations in times of disasters and calamities by sending its own personnel.
"Christians are 0.5 per cent of the population in Gujarat and Catholics 0.25 per cent, but the Catholic Church has always been in the front line, without discrimination of caste or creed. Even in this tragedy, we will be witnesses of God's love through our apostolate of service," the archbishop added.
Source: AsiaNewsIT
India Tragedy