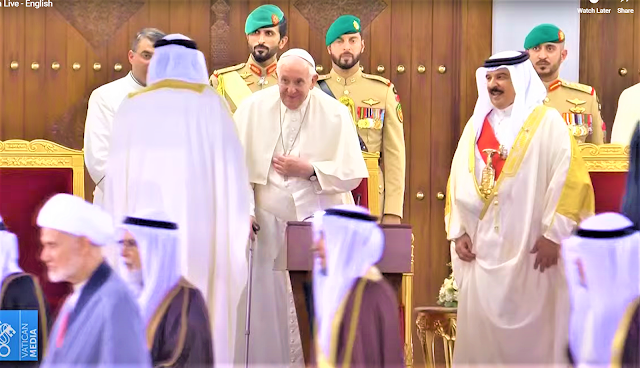 Pope Francis made his  39th Apostolic Journey abroad on November 3rd, 2022, in a visit to Bahrain. The papal plane landed in Awali, in the Kingdom of Bahrain, at the Sakhir Air Base at about 16:36 pm (GMT +3). He received a welcome at the airport, then was warmly welcomed by King Hamad bin Isa Al Khalifa of Bahrain at the Sakhir Royal Palace.
The Holy Father then met with local authorities, representatives of civil society, and members of the diplomatic corps.
There are approximately 1.5 Million people living in Bahrain, with about 161,000 Catholics from abroad. These faithful are served by 2 Catholic churches and 20 priests (According to the 2020 Vatican Statistics).
The Pope is visiting the Kingdom of Bahrain from the 3rd–6th of November. During this period, he will address the Bahrain Forum for Dialogue, a conference that will focus on the theme: “East and West for Human Coexistence.” Over 200 religious leaders from various parts of the globe are expected to attend the conference scheduled for 3–4 November. The rest of the four-day Apostolic Journey will see Pope Francis meeting privately with the Grand Imam of Al-Azhar, holding an audience with members of the Muslim Council of Elders, and attending an ecumenical meeting and prayer for peace in the Cathedral of Our Lady of Arabia. Other highlights of the Pope’s visit include the celebration of Holy Mass for the country’s Catholic population and a meeting with young people, as well as the local Bishops, priests, consecrated persons, seminarians, and pastoral workers. The Holy Father is scheduled to return to Rome on Sunday.
Edited from Vatican News with Stats from CIA and Vatican Worldbook 2020 - Image Screenshot Vatican Media
Bahrain King Hamad bin Isa Al Khalifa Pope Francis Pope in Bahrain