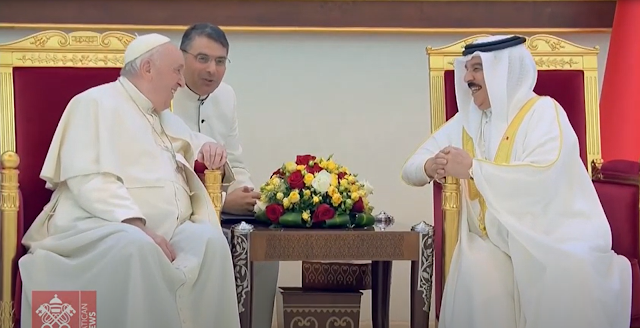 Pope Francis ended his 39th Apostolic Journey in Bahrain. His visit lasted four-day to the Kingdom of Bahrain.
According to Vatican News his single central message was: peaceful coexistence.
The Pope received a warm welcome from the King and people of the Muslim nation which has over 1 Million people and 161,000 Catholics.
The first several events were focused on interreligious dialogue and held out the possibility of creating an oasis in what he called the “parched deserts of human coexistence.” Pope Francis made this appeal when speaking with Bahrain’s civil leaders, at the closing session of the Bahrain Forum for Dialogue, and in his words to the Muslim Council of Elders.
On Friday, the Pope met with the Catholic community of the entire Gulf region. He encouraged Christians to love their neighbors even of other faiths, and even when evil is done to them. Pope Francis also called on the Church’s consecrated and lay ministers to follow the three-fold path of joy, unity, and prophecy in their proclamation of the Gospel with their actions. The Apostolic Carmel Sisters work in the region. Five of these nuns run the only Catholic school in Bahrain; the Sacred Heart School, where Pope Francis met with the youth. In their decades of ministry, the sisters have formed thousands of young minds in Bahrain, and many people in government position were formed by them. Now, as the visit has ended, the Pope's time here in Bahrain will surely begin to bear fruit, as everyone returns to their daily mission of spreading peace in the Gulf region and in the world.
Edited from Vatican News
Pope Francis Pope Francis news Pope in Bahrain